Excluding the gains from an Australian subsidiary, the company’s revenue would have risen by 9% yoy due to contributions from development projects in Cambodia, Singapore and the UK, but these were partially offset by lower income from its Singapore hotels and a development project in Ireland.

• Oxley remains confident about debt repayment. During the analyst call yesterday, the company stated that it expects to generate enough cash flow (principally from overseas projects) to pare down its high levels of debt, specifically for the S$469m of bonds that are due in 2021 and S$150m in 2022.

In 1HFY21, Oxley generated S$268m in operating cash flow from the completion of UK and Ireland projects, which was then used to pay down debt.

However, it noted during the analyst call that starting from Dec 20, local sites had returned to normal and construction had fully resumed.

• Overseas projects will be the main revenue generator in the short and long term. Its sites at Royal Wharf are set to complete and hand over an additional 50-60 units by end-Mar 21, while The Peak project in Cambodia will complete by end-Feb 21, and thus allow the company to collect a material amount of cash from buyers. 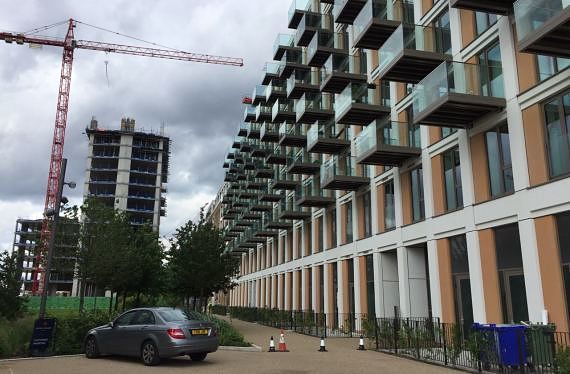 Oxley has a large waterfront project developing Royal Wharf in London.
File photo.
In the longer term, Oxley’s two projects at Deanston Wharf (the UK) and Connolly Station (Ireland) will be key growth projects as the company forecasts that they will generate c.S$2b in revenue.

• Australia – To sell or not to sell? During the analyst call, it was clear that any potential transaction would likely be an opportunistic one given that Oxley has yet to make a decision on whether to divest its land at Walker St with gross development value (GDV) of S$446m.

Oxley revealed that the response to the sale tender has been good thus far but it is still open to developing the piece of land into apartment blocks if its price is not met.

• Malaysia – Seeking help. Due to COVID-19-related issues and the resulting travel restrictions, the company admitted that its Oxley Tower project in Kuala Lumpur has been difficult to manage from afar.

It announced on 19 Jan 21 that it had entered into a JV with the Pavilion Group to manage, market and complete the project. Given Oxley Tower’s large GDV of S$845m and its low levels of debt, the company should witness material cash inflow once it is completed in 2023.

China remains problematic with very slow sales at its Gaobeidian project with only 2% of units sold. In the longer term, Singapore, the UK and Ireland will be Oxley’s core markets, in our view.

• Capex outlook. Management stated that it does not foresee future capex to be onerous unless a strategic decision is made to buy more land. With Oxley’s projects in London and Dublin, the company’s track record that was built up over time resulted in its access to construction loan vs prior projects which necessitated the issuance of bonds to fund.

Oxley did highlight that its Australian projects may need to incur capex as the company does not have access to construction loans; however this is a moot point if the company is able to divest its piece of land for S$30m-50m.

• No dividend was declared for 1HFY21, compared with a dividend of S$0.32/share for the previous corresponding period.

EARNINGS REVISION/RISK
• No changes to our earnings forecasts.

We have 518 guests and no members online