Chan Kit Whye: Waiting to see if SWISSCO will be worth a buy

SWISSCO HOLDINGS is now trading at around 22 cents SGD. Is its share price undervalued and does it reflect the group's existing fundamentals?

In order to answer the question, we first look at the significant chronological order of events and corporate moves leading to where Swissco is currently. 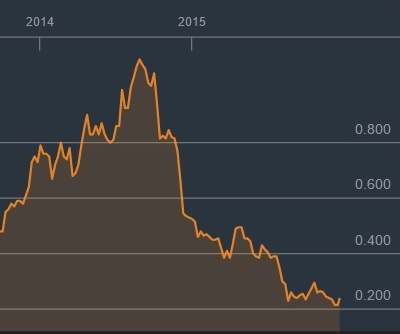 At 22 cents in share price, Swissco has a market cap of S$148 million and a trailing PE of less than 3. Chart: Bloomberg.In June 2014, SGX approved a proposal by Swissco to acquire Scott & English Energy for S$285 million, the consideration to be made via an allotment of 452.4 million new Swissco shares to the seller based on S$0.63 per share.

In July 2014, Swissco shares, excluding the ones allotted to acquire Scott & English Energy, underwent a reverse stock split of 2 shares to 1, reducing its number of shares to 216.65 million.

In the process, its share price was adjusted from 43 cents to 93 cents, and continued climbing up to around $1.10 before it started to trend lower from September 2014 to where it is currently.

The injection of Scott & English Energy into Swissco is a way of bringing the operating subsidiary of Kim Seng Holdings into a listed vehicle.

There are about 2,100 shareholders and its free float is about 23% or 86 million shares.

In August 2014, 22 million redeemable preference shares were issued to S&E Offshore which will ultimately be converted to about 31 million Swissco shares.

The pricing of the issue at at that time was based on Swissco share price of slightly over 90 cents.

In December 2014, Swissco announced that its Deputy CFO had misappropriated S$1.68 million of which S$900,000 had been recovered. Impact on Swissco financials was insignificant.

Prior to his retirement, Chan Kit Whye (left) worked more than 30 years as Regional Finance Director, Financial Controller and Manager in a multinational specialty chemical business. He has played an active role in CPA (Australia) Singapore Branch, taking up positions in its Continuing Professional Development and Social Committees.   Kit Whye is a Fellow of CPA Australia, CA of Institute of Singapore Chartered Accountants and CA of the Malaysian Institute of Accountants. He holds a BBus(Transport) Degree from RMIT, MAcc Degree from Charles Sturt University and MBA from Durham Business School.

0 #1 Dave123 2016-09-08 20:40
Even veteran got this wrong. Wonder the value of expert advice in a market that puts theoretical valuation last place.
Quote
Refresh comments list
NextInsight.net