CORDLIFE: One Of Forbes Asia’s “Best Under a Billion” Companies

CORDLIFE GROUP has been honoured by Forbes Asia as one of the “Best Under a Billion” companies at an awards ceremony in Kuala Lumpur.

The 2 Nov 2015 event held at Sunway Resort Hotel and Spa was a tribute to the entrepreneurial success of 200 companies that made Forbes Asia’s list of being the best small and midsized public companies in Asia. 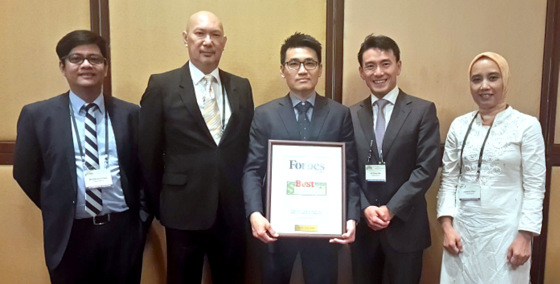 Cordlife CEO Jeremy Yee said: “We are deeply honoured to be selected by Forbes Asia as one of the “Best Under a Billion” companies. This represents a strong endorsement of our strategies and efforts to grow the Company, which has delivered a respectable two-year revenue CAGR of 28.8%.

"Moving forward, we seek to maintain our leading market positions in the Asian cord blood and cord lining banking markets and innovate with new healthcare products and services in the mother and child segment.

"Growing demand for healthcare services and products in the region coupled with our long term track record should position us well for the next phase of growth.”

Mr Yee, who received the award on behalf of the company, also participated in a panel discussion moderated by Tim Ferguson, Editor of Forbes Asia, titled “Blueprint for growth” prior to the awards ceremony.

Mr Yee shared his insights into heading an emerging company and bringing it to the next level.

We have 861 guests and no members online