CHOW SANG SANG’S Golden 2013 Will Be Tough To Repeat 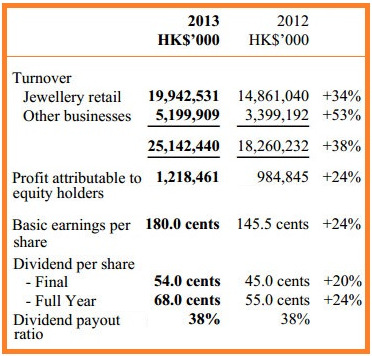 CHOW SANG SANG Holdings International Ltd  (HK: 116), one of the most recognizable jewelry and precious metal wholesaling brands in Greater China, saw its net profit surge 24% to 1.22 billion hkd last year, thanks in large part to the “gold rush” of early 2013.
However, executives told investors during a teleconference that the golden performance of last year will be difficult to repeat in 2014.
The luxury play boosted its 2013 revenue 38% to 25.14 billion hkd, with volatility in prices for the yellow metal in the first half of last year helping out the top line.
“The year 2013 is not going to be easy to repeat in 2014.

“It’s hard to imagine another ‘gold rush’ this year,” said Chow Sang Sang CFO Mr. Theodore Tam.
Despite the surge in gold sales in the first half of last year, the firm’s main business remained jewelry.
As the major contributor to total turnover and profit for Chow Sang Sang in 2013, jewelry retail registered a turnover of 19.943 billion hkd, or 79% of the total.
Operating profit for the segment rose 21% to 1.35 billion hkd. 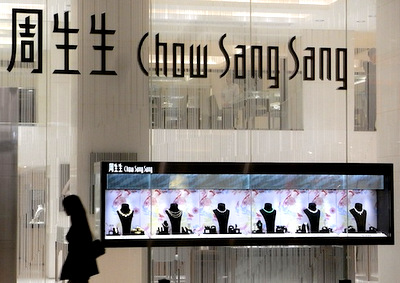 Store in Hong Kong. Photo: http://www.jingdaily.comBy geographical region, Hong Kong and Macau contributed 62% of the topline, up from last year’s 61%, while the PRC’s share stood at 37%, decreasing from 38% in 2012.
As of end-2013, Chow Sang Sang operated 375 shops in Greater China, all self-owned with no franchises, with nearly 300 in the PRC and the remainder in Hong Kong and Taiwan.
“Since 2010, we’ve been targeting around 50 new shops per year, but have seen a slightly slower expansion of late,” Mr. Tam said, adding that slower sales growth of late were to blame.


Chow Sang Sang generates strong recurring cashflow from its jewelry business and continues to enjoy a solid cash position.
As at 31 December 2013, the Group had cash and cash equivalents of HK$1,009 million (2012: HK$674 million).
During the teleconference, Mr. Tam along with Chairman & Group General Manager Mr. Vincent Chow and Executive Director & Group Deputy General Manager Mr. Winston Chow were on hand to answer queries from investors and analysts.

Chow Sang Sang, whose market cap is 12.6 billion hkd, has seen its Hong Kong shares move within a 52-week range of 15.0 – 26.2 hkd, with a recent trailing P/E of 12.77 times.
Chart: Yahoo Finance
Chow Sang Sang was not planning to change its retail store management model anytime soon.
“Having all of our stores 100% owned by Chow Sang Sang ensures consistency in both quality and products,” Mr. Tam added.
The company was the first jewelry play to become listed in Hong Kong, successfully doing so in 1973, and has production facilities in both China and Hong Kong.
In addition to retail jewelry sales, it also is into the wholesale of precious metals. 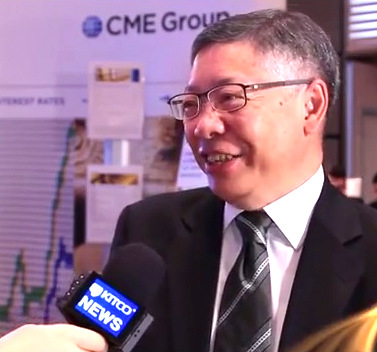 Chow Sang Sang Chairman & Group General Manager Mr. Vincent Chow. Screenshot: http://www.youtube.com/watch?v=b5vbV8PF0qILooking back on 2013, Mr. Chow, the chairman, said the dominant themes facing Chow Sang Sang were the slowing down of the Chinese economy, credit tightening and the official discouraging of excessive luxury spending by the new administration in Beijing.
“Together they caused an overall slackening in consumption and the luxury sector was particularly hit hard,” Mr Chow said.
In the first half of 2013, Chow Sang Sang recorded a substantial increase in gold product sales due to the sharp drops in gold price in April and June.
“Subsequent swings did not deter consumers, not on the mainland nor in Hong Kong. They seemed to have heightened enthusiasm for gold purchases throughout the remainder of the year,” he said.
Last year, visits to Hong Kong by mainlanders – increasingly big spenders overseas --rose by more than 16% over 2012, and PRC visitors were the main drivers of the gold rush in Hong Kong last year, he added.
As a luxury play with a fixation on preserving a high quality image, Chow Sang Sang was very keen on protecting its brand cachet.
“In Greater China, our brand positioning is located somewhere between the major international brands and the local brands.
“We don’t want to be seen as a generic gold or jewelry retailer so we spend a lot of time building our brand and boosting ties with global brands, and going forward we will also be boosting R&D to advance our strategy,” said Mr Chow.
Chow Sang Sang’s new 199 million hkd plant in South China’s Shunde started production in July.
Capital works have been mostly completed and paid for, with the ramping up of production capacity on track,” Mr Chow said.
The fall in gold price which began last year continued to weigh on Chow Sang Sang's topline. For the two months ended February 2014, jewellery retail  turnover was flat compared to 2013, despite a 16% increase in gold quantity sold, and a 23%  increase in total sales count.

Chow Sang Sang, however, sees a bright spot. “The Year of the Horse in 2014 is an auspicious year for weddings and with gold prices at a relatively low levels, demand for gold and gold products is expected to be robust.
“In order to attract more sales and improve margins, the Group’s strategy is to rely on product innovation and lowering of costs, and to avoid discounting as far as possible,” Mr Chow said.

We have 1601 guests and no members online