Kevin Scully: "Likely that something is brewing @ INNOTEK"

This article was recently published on www.nracapital.com and is republished with permission. 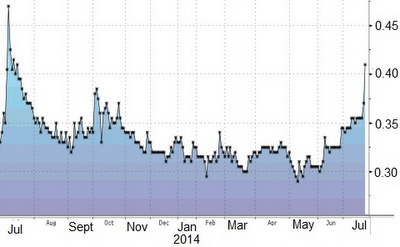 Chart: Bloomberg. The chart shows that Innotek shares have risen about 30% since late may 2014 but only started rising sharply last week.

Some corporate action is possible because:

a) in May 2014 - its Managing Director Yong Kok Hoon resigned

When the shares started to rise last week -Innotek was queried by the SGX.

Innotek's first response was that it was not aware of any reason for the price movement. It subsequently announced that Gazelle Capital, one of its substantial shareholders was in discussions.

Looking at its 2013 annual report - the shareholder numbers are as follows:

From this and the Gazelle announcement, my view is that any corporate development involving Innotek must involve the Chandaria's.

Let's wait and see but looking at the share price movement since May and the corporate developments listed above - it appears likely that something is brewing.

We have 4646 guests and one member online