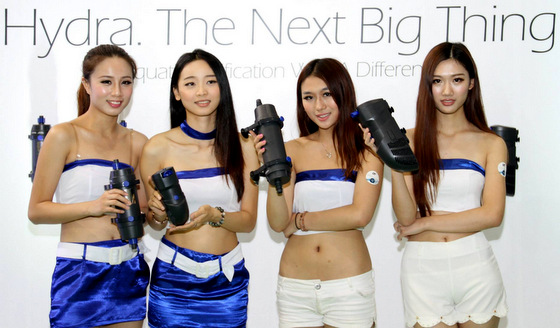 Qian Hu's new range of filtration system, named Hydra, being promoted at an event. Photo: Company Earnings below expectation. Qian Hu’s 2Q14 net profit of S$22k came in 93% below our S$0.3m estimate due mainly to lower-than-expected sales and slightly weaker gross profit margins.
 Hydra sales pick up slower-than-expected… Qian Hu’s proprietary product, OF Hydra Aquatic Depurator, launched last year. Sales disappointed due partially to the European market taking a longer time to certify its products. However, after the long acceptance period, the first shipping for this product is expected soonest in coming quarter.
 Maintain forecasts and recommendation. As the group remains optimistic for its transformation business model and expects to continue improving sequentially, we kept our earnings forecast relatively unchanged.

We maintain our fair value at S$0.12, still pegged at 1x FY14 P/NTA. On the bright side, its associates turned profitable after seven consecutive quarters of loss. 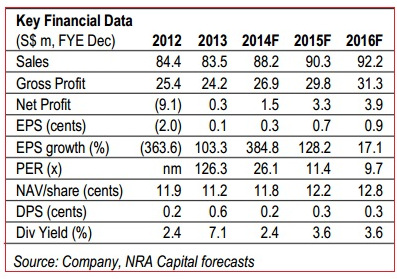 Given the downside risk is limited and continued improvement of its operating profit and cash flow, maintain Overweight recommendation.
 1Q14 revenue down 1% yoy to S$21.1m due mainly to lower contribution from Plastics division. Plastics revenue declined by 30.6% yoy due to a reduction in market demand as a result of revision in selling prices of its plastic products in view of the increase in raw material (resins) prices.
However, these were mostly offset by the growth from the fish (+4% yoy) and accessories (+8% yoy) divisions.
 EBITDA margins improved by 0.9% pts yoy to 3.1% boosted by the stabilisation of Dragon Fish prices that yielded strong margins. However, this was partially offset by its plastics segment due to higher raw material price, resins used for its plastic division and gradual increase in overall operating expenses.
 Balance sheet remained healthy. Qian Hu generated S$0.5m negative free cash flow in 2Q after increasing its working capital requirement. As a result, its net gearing increased from 11% in the previous quarter to 13.5%.

We have 444 guests and no members online