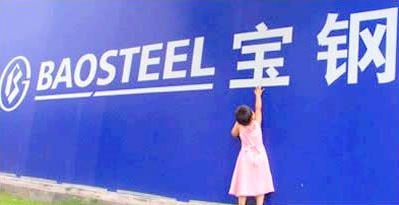 In this year’s crop of buyback firms, China’s top listed steelmaker Shanghai Baosteel (SHA: 600019) topped the charts with six individual buybacks since September of this year totaling 1.81 billion yuan and comprising 20% of the total buyback capital in 2012.  Photo: Company

So far this year, 21 China-listed firms have bought back shares worth 12 billion yuan.

That’s a big jump from the just four firms doing so in 2011.

Is this the new normal?

Unless 2012 ends with a flurry of fireworks to bring in the New Year, this year will mark the third straight losing 12-month stretch.

Therefore, it is only natural that listed firms will be increasingly resourceful in finding ways to boost their share prices – via both orthodox and non-traditional means.

And if there simply isn’t demand in the market for a particular listco's shares, management will often go to extreme lengths to help improve returns for shareholders.

This includes major share buybacks, or dipping into the personal wealth of individual leading shareholders to help resuscitate a more buying-friendly appetite for the company’s shares.

The risk, of course, is that it will fail and will be money thrown down the drain and forever unrecoverable.

Unless 2012 ends with a flurry of fireworks to bring in the New Year, this year will mark the third straight losing 12-month stretch for China shares

The lure of such tactics – besides boosting sharebuying interest – is almost always a widespread belief among the board and/or controlling shareholders that the company’s true value is somehow misunderstood and underappreciated by analysts and the investment community at large.

But of course, these 21 A-share listed firms that have spent 12 billion yuan from their own coffers to rejuvenate demand represent a potential moneypit for prospective investors as well.

Generally speaking, existing shareholders are all too happy to see major stakeholders open their wallets wide and buy shares in their own company from the open market because it almost invariably boosts the value of share prices.

However, those sitting on the sidelines looking for bargains are of course wary of this price-boosting device and are much more comfortable buying low into a company with intrinsic value that looks to be heading into more expensive territory.

Therefore, a share buyback-induced price spike is typically not heeded as a major buy-in opportunity by seasoned prospective shareholders in any particular counter.

In 2011, the highest-profile A-share listed enterprise to resort to this means was Dymatic Chemicals Inc (SZA: 002054).

Last year, the four buyback firms repurchased 46.4 million shares worth a total of 478 million yuan – a far cry from the 12 billion yuan already bought back this year alone.

In fact, prior to the buyback happy year that is 2012, a total of just 30 China-listed firms have resorted to this tactic in the 20-year history of A-shares – with 24 in the bullish year of 2006 alone.

In this year’s crop of buyback firms, China’s top listed steelmaker Shanghai Baosteel Group Corporation (SHA: 600019) topped the charts with six individual buybacks since September of this year totaling 1.81 billion yuan and comprising 20% of the total buyback capital in 2012.

Market watchers say that the flurry of buybacks this year – especially in the second half – is not all bad news for long-term market prospects.

There is a growing sense that the spate of buybacks of late is not only an indication that listco management feels the market bottom has been reached, but also that share prices are bound to be heading into more bullish territory sooner rather than later.

These 21 buyback firms are merely attempting to get the ball rolling a bit earlier than the general market is wont to do.

We have 404 guests and no members online