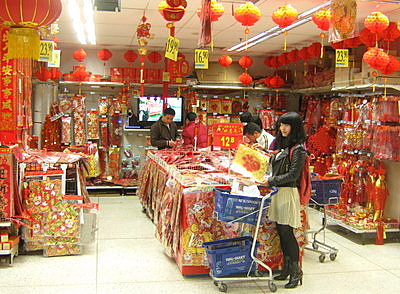 DECEMBER AND the season of Advent is upon us, and there is more than just holiday cheer in the air.

Chinese shares have risen nearly 11% since the month began, yet Spring Festival is still a long ways away.

So has the “Chinese New Year Effect” arrived early this year?

Analysts have been struggling to make sense of the red hot performance of Chinese equities in December – the month marking the beginning of the cold season and winter.

Some say that share prices for blue chips were depressed for too long and it was only a matter of time before their true value was appreciated, as is beginning to happen now.

Others say steady upticks in daily trading turnover are behind the Yuletide rally, while some analysts attribute it to a steadily improving stream of economic metrics emanating from Mainland China and other key markets.

But could it also be that the so-called “Chinese New Year Effect” already begun to take effect?

If so, it’s arriving way ahead of schedule this year, as The Year of the Snake doesn’t officially begin until February 10, 2013.

So what exactly is the “Chinese New Year Effect” and why are more and more market watchers saying they think they began hearing it hissing beginning earlier this month?

China shares have risen nearly 11% in December so far

The de facto definition of the “Effect” is the gradual upward climb that China’s domestic stock markets usually enjoy beginning in January and petering out around May.

For a culture as old and continuous as China’s – some five millennia as the story goes – traditions have a way of digging in deep.

So when a society has looked at the late January/early February period each year as a fresh start of sorts -- traditionally a time to begin preparing for the next harvest season, and in more modern times a perfect opportunity to throw out the old and bring in the new -- then it is only natural that such thinking has migrated to share trading behavior as well.

For its first 4,900 years, China was predominantly an agricultural-based society.

But the past century has brought both tremendous turmoil and phenomenal progress so that now the Chinese New Year period is seen more as an opportunity to replace one’s wardrobe or smartphone and less as a time to decide whether to plant rice, barley or red sorghum.

While not empirically quantifiable, it is clear that A-shares more often than not enjoy a surge of buying interest in and around Spring Festival, aka: Chinese Lunar New Year.

On the other side of the coin, the buying sentiment typically reaches its peak in the “merry merry” month of May, when the bears begin to rule the roost in China, or at least begin to dampen the upbeat market sentiment.

“Sell in May and Go Away” (5月卖股就开溜) is how the Chinese investors phrase the poorly kept secret.

But given that the “Chinese New Year Effect” seems to have arrived early this year – likely due to an intense yearning during the bearish 2012 market for anything positive to cling to – does that mean that May may arrive early as well?

It’s something for investors to keep an eye out for, even as they celebrate China’s most important holiday this coming February.

We have 531 guests and no members online