OF THE TOP 10 largest IPOs in Hong Kong this year, nine were China-based firms or so-called H-shares.

Is this an irreversible trend?

It is more opinion than fact to say a particular city, or city state, is the “Financial Capital” of a given region.

But there is plenty of ammunition for those arguing that Hong Kong holds that very honor, i.e.: “The Financial Capital of Asia.”

Here are the facts:

The Hong Kong bourse is Asia’s No.3 capital market measured by market capitalization, and stands at nearly 20 trillion hkd, with some 1,500 listed companies selling shares.

Although Hong Kong’s bourse is smaller than neighboring Tokyo and Shanghai, and ranks sixth worldwide, it is still an admirable feat for a Special Administrative Region (SAR) of just seven million residents.

And because Hong Kong is all about finance, while certainly dabbling here and there in shipping and property, the SAR can focus almost wholly on the business of making money without actually making anything.

Furthermore, Hong Kong’s equity markets are miles ahead of Tokyo’s in terms of openness, transparency and acceptance of outside participation.

And compared to Shanghai’s A-share markets which only began accepting foreign investment a decade ago and still have severe restrictions on asset repatriation, Hong Kong’s bourse is in a different league of accessibility altogether.

Add to all this the fact that up until recently, share prices for Hong Kong-listed firms were considered far more market based and “realistic” than their A-share listed brethren in Shanghai and Shenzhen, and were thus far more appealing to seasoned investors with an eye for value both at home and abroad.

Therefore, it should come as no surprise that the bourse behemoths going public in Hong Kong this year are overwhelmingly from neighboring Mainland China. 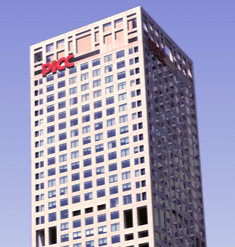 People’s Insurance Company (Group) of China (PICC: HK: 1339) took the cake this year, launching a 3.1 billion usd IPO, the biggest debut in Hong Kong for 2012. Its headquarters make for a prominent landmark in Beijing.
Photo: PICC

Mega-IPOs launched in Hong Kong by Mainland plays are nothing new.

PICC was the biggest IPO globally since Agricultural Bank of China (HK: 1288) went public in Hong Kong in 2010.

But PICC didn’t jump into the Hong Kong bourse willy-nilly, with the insurer doing a bit of hand wringing in June of this year during the sluggish market, finally launching its IPO five months later after market sentiment began its slow ascent.

Its last roadshow was in mid-November, and interest levels were high enough for the Beijing-based insurer to pull the trigger on November 26 and go public in Hong Kong.

But that’s not to say that Hong Kong’s market regulator is beating back listco candidates at the door, as total IPOs in the SAR this year were down 50% from a year earlier, and had the slowest year since 2009.

Per-IPO average proceeds raised this year in Hong Kong are down 35% from 2011 levels.

As GDP growth is expected to edge higher in Mainland China next year and share prices in Hong Kong continue to inch upwards, could PRC firms take all top 10 spots on Hong Kong’s IPO totem pole next year?

We have 2174 guests and one member online