JP Morgan has upgraded NOL to ‘Overweight’ and says the worst is over for the container shipping, terminals and logistics giant.

NOL’s share price has fallen by over 20% since its peak in Feb and it has also under performed the Straits Times Index year-to-date.

The company posted a net loss of US$254 million for 1Q2012 but the analyst believes that NOL will progressively turn around, helped by its US$500 million target to cut cost from restructuring this year, falling bunker fuel prices (down 6% month-on-month) and recovering freight rates.

Subscriber take-up rate for next generation national broadband network (NGNBN) is likely to accelerate in Singapore, according to Credit Suisse analyst Chate Benchavitvilai.

The analyst believes that M1 is a key beneficiary of the industry development, given its ability to leverage on its existing costs and relationships and (prevailing limited exposure to fixed-line.

M1 is also offering an attractive yield at 6.1% for FY12E assuming that it pays out 80% of its earnings.

He upgraded M1 to ‘Outperform’ and increased its target price to S$3 in a report dated 20 June.

Based on its recent close price of S$2.52, this translates into upside of 19%. 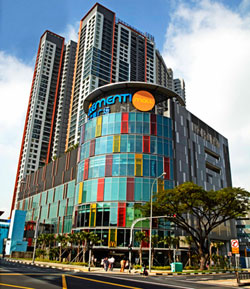 The Clementi Mall is jointly owned and managed by SPH and NTUC.

SPH’s growing retail property arm and stable cash flow from its media business gives it a return profile of a retail REIT and with limited cash-call risks, according to CIMB.

Starting out with just Paragon, SPH has since added a 60% stake in Clementi Mall and a 70% stake in the greenfield Sengkang Mall.

Although SPH does not have a formal dividend policy, it has been paying out close to or above 90% of recurring earnings (statutory level for S-REITs) consistently, with the exception of FY08-10 when it was developing and recognising earnings from Sky@Eleven.

We have 772 guests and no members online