Howard Marks: How to spot bargains -- and squeeze lessons from history 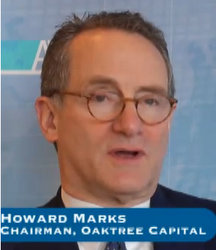 "We don’t expect to be able to hit the bottom. All we care about is that we’re buying cheap. If it gets cheaper, we buy more. Eventually, it’ll work out - so long as we are right.”

HOWARD MARKS is chairman of private equity firm Oaktree Capital, which he co-founded and grew into the biggest distressed-debt investor in the world.

Oaktree's assets under management amounted to about US$83 billion, according to an entry in Wikipedia a few years ago.

Mr Marks has just put out a 'memo to clients' in which he asserts that in the stock market, history often repeats itself and investors should learn and take advantage of such situations.

Distilling from his decades of investing experience, the 66-year-old shared a particularly interesting view on how to spot bargains (see  below). There are more insights contained in his entire memo, which is 10 pages long, and which you can read on the Oaktree website.

There has been a long period of unwavering complacent optimism in the Singapore property market for many years now. I remember 8-10 years ago this was not the case and people were very concerned with the oversupply situation. That phase of the cycle will come again, it's only a matter of time.

Compared to price/cash flow returns for many stocks, the price to rental yield cash flows returns of property, net of items like maintenance, periodic renovation costs, property tax, agent fees and such is actually pretty low.

I would much rather buy REITs if I'm looking for cash flow.
Quote
0 #1 Best 2012-04-14 11:06
Applying what is said above, the Singapore property market is filled to the brim with optimism. Investors & speculators are optimistic that prices will continue to go up and yield sweet capital gains for them. Hahaha.... History will prove them wrong soon?
Quote
Refresh comments list
NextInsight.net

We have 1760 guests and no members online