A fresh memo to clients from Howard Marks of Oaktree Capital is an illuminating read.

It is titled 'Getting Lucky' but before you get to it, here's our quick intro on the man and Oaktree as many investors in Singapore are not familiar with the names:

Who is Howard Marks? 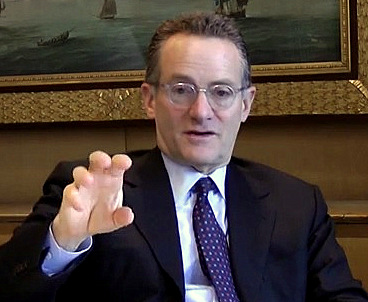 Memos from 1990 to the present are available online at the Oaktree website and should make for an enlightening read.

Even Warren Buffett, arguably the greatest investor of all time, is a fan. He has been quoted saying: "When I see memos from Howard Marks in my mail, they're the first thing I open and read. I always learn something."

And if you want more of Mark's thoughts on investing, there is the book, The Most Important Thing: Uncommon Sense for the Thoughtful Investor, which he wrote and was published in 2011.

In April 2012, Oaktree listed shares on the New York Stock Exchange at an IPO price of US$43, raising US$380 million.

Oaktree Capital shares touched US$60 recently for a market cap of US$9.1 billion and trailing PE of 10X. Chart: Bloomberg

According to Forbes in Sept 2013, Oaktree had US$76 billion assets under management, including money from 75 of the 100 largest U.S. pension plans.

Being successful in making lots of money for his clients, Marks, 67, also has enjoyed great wealth. According to Forbes, he has a net worth of US$1.9 billion.

Illuminating section in the latest memo to clients:

We have 870 guests and no members online