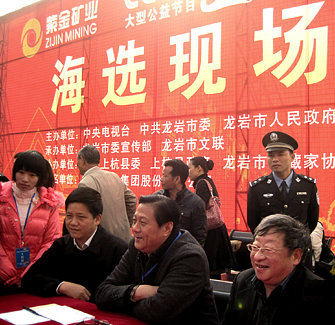 Making Amends: Zijin has been on a CSR campaign in its home province of Fujian after an environmental incident last year. Photo: Zijin

Last year, however, was a difficult one in which one of the firm's copper plants leaked acid into a river in Fujian Province, killing nearly 2,000 metric tons of fish.

After paying 30 mln yuan in fines, the company is eager to move on from the incident.

“We are very bullish on gold prices and we see them continuing to rise. But we realize that precious and base metals go through unpredictable cycles so we are not putting all our eggs in the gold basket,” Zijin Board Office Director Zhao Jugang said at a recent China Merchants Bank-sponsored investor meeting in Shenzhen.

In fact, despite being the PRC’s top gold miner, with the Chinese word for gold (“jin”) even being part of the company’s name, Zijin is actually well represented across the metals business.

“As you can see, if gold keeps going up, we are well-positioned to benefit from the selling price as well as step up our mining operations on that front,” he said. 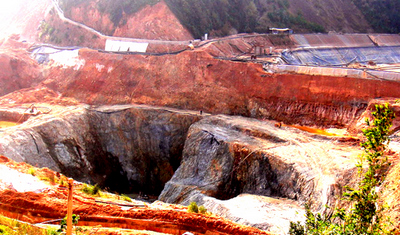 Zijin believes in exposing itself to a variety of metals, including this copper mine.  Photo: Zijin

“The same goes for copper and iron ore.”

The company’s most expensive product by far -- gold -- was also one of the most price-volatile in global markets, as anyone who regularly tracks the NYMEX or the LME can attests to.

“Gold prices change every day, and sometimes by a great deal. So it is impossible to set long-term selling prices for it. Therefore, we conduct a great deal of due diligence for our acquisition targets, taking into consideration the pricing trends of gold and other metals.

“But at the end of the day, we still consider the asking price for the mine or take-away rights the biggest factors,” he added.

And where was Zijin – which listed in Hong Kong in 2003 and added an A-share listing in Shanghai five years later -- mining for its pot of gold?

A quick look at the company’s global reach reveals major projects around the world.

In addition to its home base in Xiamen, Fujian Province, it has mining operations in The Philippines, Indonesia, Mongolia, Tajikistan, and a new site in central Russia that will be operational in July of 2012.

“We are always scouring the globe for gold mines, and also copper.”

Then he added a thought which surprised those present for its candor.

“It is relatively harder to purchase our own domestic gold mines because the government almost always has a stake. So buying foreign gold mines is much easier, and they are willing to sell as long as both parties can agree on a price. There is much less government interference,” he said.

He added that “western countries” were much more amenable to Chinese companies taking over their mining assets than they would their technology assets.

“And our operating costs are much cheaper than western countries to M&As overseas are just a matter of price.” 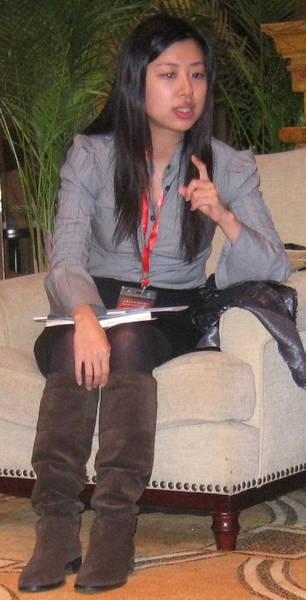 "Even the precision aluminum that FoxConn uses to make iPads and iPods at its Shenzhen plant here is made by us," said Hongqiao’s IR Manager Christine Wong.  Photo: Andrew Vanburen

And management believes its true value and potential are much more than skin deep.

This year in particular was a stand out one for the Shandong Province-based firm.

Firstly, in March, its Hong Kong IPO raised 6.4 bln hkd, less than originally planned but very satisfactory given the extremely bearish market sentiment at the time.

This gave it a very high gross profit margin of 36% for the period, which Hongqiao makes possible thanks to its emphasis on premium products, which allow premium selling prices.

But one of the most notable achievements this year has been Hongqiao’s leapfrogging up the ranks to become the country’s No.4 aluminum products producer, and the second biggest non state-run player in the land. 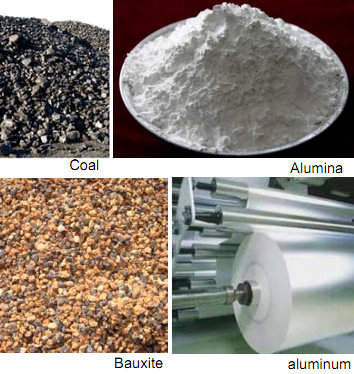 The Soup to Nuts of Aluminum: "We are also actively seeking attractive upstream M&A opportunities for our raw materials, and our goal is to one day be completely self-supplied in alumina,” said Hongqiao IR Manager Christine Wong.  Photos: Hongqiao

Indeed, Hongqiao has been expanding its production capacity rate faster than any of the big aluminum giants in Mainland China so it is little wonder that they want to minimize feedstock and energy input costs to leave more capital for expansion.

“We have our own onsite, self-owned, self-operated power plant that supplies around 41% of our needs, as our new capacity expands faster than building of our new power generators.

"Next year with our new power generators, our self-produced electricity will be 70-75%,” she said.

“We are also actively seeking attractive upstream M&A opportunities for our raw materials, and our goal is to one day be completely self-supplied in alumina,” Ms. Wong added.

"We are building our own alumina refinery in Shandong, with two million tons capacity, build in two phases. It will take around two years, and after that we can supply 60% of our own alumina."

She said the upstream construction in Shandong will be completely build by Hongqiao.

"We have already started the first phase. And if we are investing overseas, it may be via a joint venture."

She said Hongqiao’s mission was nothing short of “becoming the strongest, most efficient manufacturer of integrated aluminum products in China.”

And for this, there was plenty of market support and demand potential in the world’s largest consumer of aluminum – China – which last year used a stunning 41% of global supplies.

“Urbanization and infrastructure development are two of the most promising trends contributing to the sustainable growth of aluminum demand in China,” she said.

She said there was still plenty of business to be done before the the “critical stage” of the PRC’s rapid urbanization reached the level of “moderately developed countries.”

And a strong economy lifted all boats, as it were, with rising per capita incomes in the country leading to rapid domestic consumption growth.

She presented figures that claimed urbanization in China will drive an increase in average living area by 566 mln square meters annually, creating a demand for 370,000 tons of aluminum for housing construction (assuming 30 sq m of living area per capita) and 350 mln people migrating to cities by 2025.

“We have our own onsite, self-owned, self-operated power plant that supplies 60% of our total electricity needs,” said Hongqiao IR Manager Christine Wong.

She said China’s total construction area amounts to 50 bln sq m, of which 10% needs to be refurbished each year, demanding 3.3 mln tons of aluminum products per annum.

“And let’s not forget the ‘moving targets,’” she said.

As the largest automobile and railway market in the world, China’s thirst for aluminum makes it little wonder that it consumed over two-fifths of the world’s output last year.

“China’s auto production is expected to reach over 30 mln vehicles by 2020. Assuming China’s aluminum usage per vehicle will reach the current level of developed countries (i.e. 150kg), aluminum consumption of China’s auto industry will amount to 4.5 mln tons, almost doubling that of 2010.” 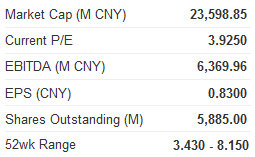 She said that aluminum was gradually elbowing steel out of long-established markets.

“Aluminum increasingly is becoming a substitute for other metals, and is replacing copper in the power industry and appliance production, and also pushing aside steel due to its lighter weight, especially in automobiles.

"We even supply molten aluminium to a downstream customer, and they produce products for Foxxcon in Shenzhen for making backcovers of ipads, around 50%," Ms. Wong said.

And lest we forget something closer to home, or our refrigerators, she said there is also growing demand for aluminum in the packaging industry for things like beverage containers.

“This application actually accounts for 4% of total processed aluminum in downstream markets.”

Due to the growing popularity of aluminum, Hongqiao was extending its reach into both upstream and downstream markets.

“We continue to both generate plans to enter the upstream resources market (e.g. bauxite, alumina and coal), in order to secure stable supplies of raw materials, and we will further enhance profitability and market competitiveness by prudently extending into the downstream market.

“Our aluminum downstream processing is expected to commence in 2H 2012, with an aggregate designed annual production capacity of 30,000 tons,” she said.

China Hongqiao is clearly steeled and showing its mettle for the challenges of a fast-growth but hypercompetitive industry climate.

STEEL CFO: 'I Refuse To Be Enslaved By Undisciplined Credit Spending'

We have 2311 guests and no members online