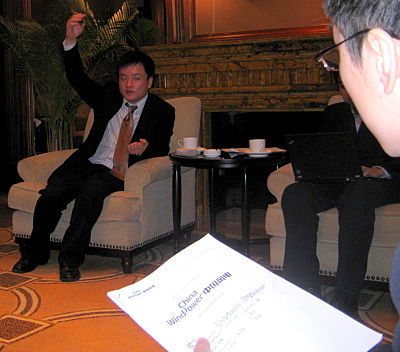 "We followed the (just concluded) CDM Conference in South Africa closely. We'll know alot more next year about what it all means, but it will likely bring us an upside," said Zhou Xiaole (left), an investor relations manager with China WindPower. Photo: Andrew Vanburen

CHINA WINDPOWER Group Ltd (HK: 182), a major maker of wind power equipment and a growing force in the wind farm management business, feels this year’s turbulence will only make it stronger for future challenges, an official told investors in Shenzhen.

To begin with, the firm shook the sector in June, suddenly announcing plans for a spin-off listing of its unit which manufactures wind-turbine components – Tianhe New Energy Equipment Ltd.

Then, three months later, amid protracted bearish sentiment and turbulence in Hong Kong’s capital market, China WindPower just as unexpectedly announced in early September that it had decided to postpone the Tianhe spinoff listing plan.

Explaining the timing change, China WindPower (CWP) Chairman Liu Shunxing said at the time: “We are still confident on the development of Tianhe. The delay of the spinoff and listing won’t affect the Group and Tainhe’s business. We will re-evaluate market conditions at the end of this year and consider whether or not to spin off Tianhe.” 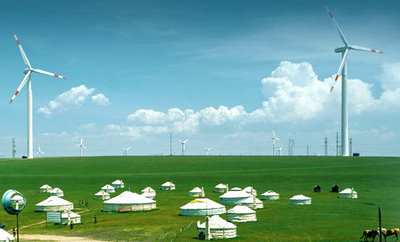 China WindPower’s officially released response at the time was: “We are unaware of reasons for the share-price move. The company is not involved in negotiations related to acquisitions and isn’t aware of any other matter of a price-sensitive nature.”

These events all followed the company’s rather surprising first-half earnings in which net profit jumped nearly 78% year-on-year to 237 mln hkd despite a top line decrease of 26% to 258 mln hkd.

Major reasons for the somewhat counterintuitive outcome included a near halving of construction costs to 126 mln hkd as well as gains from disposals of subsidiaries amounting to over 195 mln hkd.

Currently, China WindPower’s Hong Kong-listed shares are at around 0.30 hkd, far away from their 0.86 hkd 52-week high and unsettlingly close to their low of 0.28.

And given that this gives the company a P/E of just 4.1 times, compared to an industry average of 9.1 times, the company is eager to let investors know how undervalued it believes its shares are.

Substantially helping its cause was a recent announcement, proving the firm was serious about boosting its energy generating capacity from the free supply of moving air around us.

China WindPower unit Tianjin Century Concord Huaxing Wind Power Equipment signed two agreements to pay a total of 500 million yuan to Sinovel for its turbines for two wind farms in Northeastern China’s Jilin Province with capacities of 49.5 megawatts each, with the unit also agreeing buy turbines from Goldwind for 238 mln yuan for a 49.5-megawatt wind farm in Liaoning Province, also in the Northeast.

China WindPower sees a lot of Goldwind and other peers these days.

According to Energy Source Guides, Xinjiang Goldwind Science & Technology Co (HK: 2208, SZA: 002202) -- a state-run wind turbine manufacturer based in the northwestern province of Xinjiang, is the top turbine maker in China with an over 25% share, and among the top five globally.

Of Mainland China’s over 80 wind farms currently in operation, China Longyuan -- a wholly-owned unit of China Guodian Group -- operates 32 wind farms in the country housing 952 turbines capable of producing around 30% of total wind generating capacity in the PRC.

CWP has invested in over 30 wind farms and set up regional management organizations in 12 different regions.

By the end of June 2011, China WindPower had secured more than 21GW wind resources with exclusive project development rights, and new projects lined up suggest this will continue rising steadily.

But next year was going to be alot better, according to China WindPower Investor Relations Manager Zhou Xiaole.

Only 24 hours before Mr. Zhou began his meeting with investors that day, the landmark clean development mechanism (CDM) meeting in Durban, South Africa had just ended on a decidedly upbeat note.

Pundits were calling the global meeting of industrialized and developing countries a resounding success, but only due to 11th hour heated negotiations and compromises, with so-called “rich” and “poor” country representatives agreeing on mandated carbon emission cuts over a period of time.

“We followed the CDM Conference in South Africa very closely. We’ll know a lot more next year about what it all means, but it will likely bring us an upside,” said Mr. Zhou.

Luo predicted that by 2020, at least 8% of China’s energy needs will be met by wind power. Wind currently accounts for around just 2% of China’s electricity generation, leaving a tremendous potential for future growth at the expense of other forms of energy production. 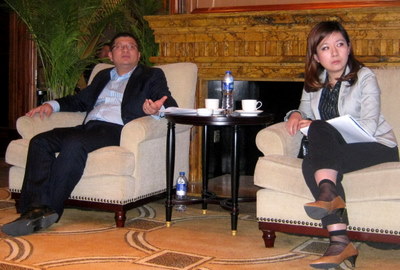 GCL-POLY ENERGY Holdings Ltd (HK: 3800), China’s top polysilicon and wafer supplier and and one of the world’s top five solar firms, is coming off an outstanding interim results period.

In case you missed it, the Hong Kong-based firm with production facilities and wind farms across Mainland China saw its first half revenue soar 162% year-on-year to 15.2 bln hkd, leading to a 351% net profit spike to 3.6 bln.

Besides polysilicon and wafer operations, GCL-Poly also develops, constructs and manages power plants as well as carrying on some coal trading activities.

So amid stiff competition and recently nosediving polysilicon prices, is the firm well positioned to survive a very crowded market?

The company thinks so.

GCL-Poly found a way to capture energy from the sun (right) while keeping the harsh rays from reaching the car owners underneath.  Photos: GCL

It is decidedly bullish on the sector.

“We are striving to become the world’s biggest producer of polysilicon by mid-2012, raising our capacity to 65,000 metric tons by that time,” GCL-Poly Senior Investor Relations Manager Wang Manjian said during a China Merchants Bank seminar in Shenzhen.

“Production costs continue to flatten out, and already the price to produce one kilogram of polysilicon has fallen to around 20 usd,” Mr. Wang added.

This pricing environment is beneficial to a lot of the new government-supported capacity expansion in the country, he said.

“GCL-Poly should have total capacity of 31,000 metric tons by the end of this month.”

As of end-July this year, GCL-Poly had silicon wafer capacity of some 6.5 GW.

“We completed new wafer capacity in the March-July period and we are on course to also become the world’s No.1 solar wafer producer.” 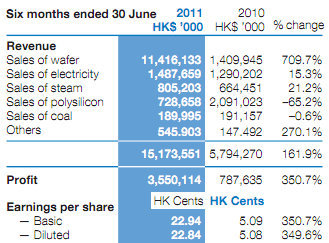 He said the company would continue to scour the planet for lucrative supply deals, much like a recent 5.2 MW solar power facility sold to the San Diego Unified School District and a 5.8 MW facility to the Palmdale School District of the Greater Los Angeles Area – as well as other orders which will be operational by year-end.

With achievements like these, it is no wonder GCL-Poly’s Hong Kong-listed shares have held their valuation steady over the past three months, a very volatile time for most counters.

“Energy shortages and environmental pollution are the two major challenges which human beings will encounter in the long run. Exploration of renewable energies and the development of a low-carbon economy are the important ways to overcome these two challenges, and they are also seen as important development opportunities for emerging industries.

“As one of the most sustainable renewable energy sources, solar power is drawing more and more attention and support from governments. We believe this will mark the healthy development of the industry,” he said.

And GCL’s strengths as both a leading raw material owner, developer, and end product producer will allow it to hedge against all variety of price and market fluctuations.

“The benefits derived from the economies of scale of upstream and downstream enterprises have lowered our production costs. It will help to lower the power generation cost of the whole system.

“Coupled with the newly emerging solar markets and the supportive programs, the investment returns of PV (photovoltaic) industry will be greatly enhanced. We believe the markets in China, the United States, India and Japan will experience rapid growth in demand as well.”

And domestic policy was not throwing a shadow over solar energy by any means.

“We also believe that the benchmark on-grid tariff policy set this summer for solar energy will play a crucial role in opening up the PV application market in China. China will transform from a country which manufactures PV products to a major user of PV products.”

We have 328 guests and no members online