AsiaPacFinance.com: "We may see a short rally in Jan 2012"

The content below was published recently on www.asiapacfinance.com and is reproduced with permission

WE TUNED to CNBC and Bloomberg today, and realized how depressing it can be absorbing all the bad news of sovereign debt defaults, political agendas and increasing job cuts.

But we analyzed the S&P chart using Ichimoku analysis and it's not that bad - in fact we may even see a short rally in January 2012.

The January effect is a calendar-related anomaly in the financial market where financial security prices increase in the month of January. This creates an opportunity for investors to buy stock for lower prices before January and sell them after their value increases.

Therefore, the main characteristics of the January Effect are an increase in buying securities before the end of the year for a lower price, and selling them in January to generate profit from the price differences.

While the January effect has been less pronounced in recent years, we combined Ichimoku and Fibonacci Lines in analysing the price action of the S&P 500 into 2012: 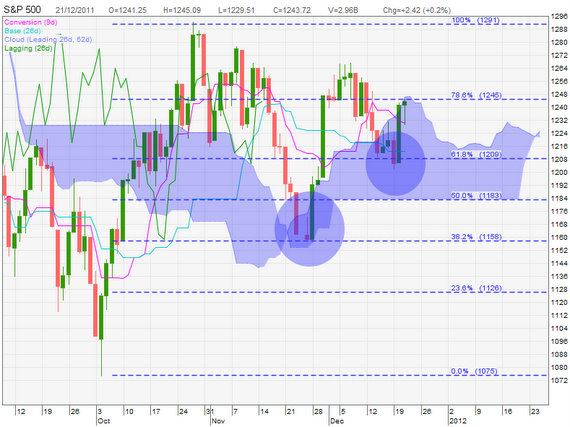 Tenkan Sen (pink line) is still above Kijun Sen (turquoise line), with price looking to break out of the kumo cloud to the upside.

We conclude significant downside protection unless the S&P breaks below 1183. If not, we could see a short rally in January 2012.

0 #1 abb 2011-12-23 23:20
Mark Mobius, the Franklin Templeton executive who pioneered emerging markets investing, expects Europe's debt crisis to be resolved in the middle of next year, sparking a rise in global bourses.

"The European crisis isn't as deep and terrible as people think," Mobius was quoted as saying by Valor. "Nations there are in a process of negotiations and that takes time."

We have 550 guests and no members online