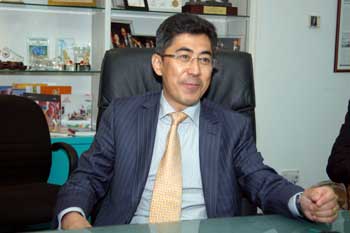 HanKore CEO David Chen took over Bio-treat in 2009 as a white knight after it defaulted on its convertible bond issue. Photo by Sim Kih

HANKORE IS now a new animal, having put behind its Bio-treat’s legacy of defaulting on convertible bonds in 2008.

While its cash reserves of Rmb 78.9 million cannot be considered strong for a Build-Operate-Transfer (BOT) player in the water sector, the CEO, David Chen, emphasized during an interview with NextInsight that the group’s balance sheet has improved greatly after it completed its capital restructuring in Apr.

It has cleared all debt from its zero coupon bonds, a legacy of the US$206 million convertible bond.

The bonds were partially paid off and the outstanding balance of S$169.3 million subsequently marked down to S$37.1 million. There was a rights issue at 4 cents apiece on the basis of 3 rights shares for every 5 shares held, which helped to further pay down the debt.

”Being debt-free makes the securing of new contracts easier,” he said. The group’s gearing is now 37%.

“China’s water sector is poised to fly. The environmental sector is one of the 10 areas of focus in China’s 12th 5-year plan. And in that sector, the water sector is top priority,” said CEO David Chen.

Secondly, its BOT projects are generating more cash due to increases in water treatment tariffs.

Mr Chen became involved in the company from Dec 2009 when his wholly-owned investment vehicle, Giant Delight, pumped in cash of HK$367 million (about S$70.6 million) to restructure Bio-treat. The effort was completed in Apr this year.

About two thirds of the money was used to pay off the outstanding debt from the convertible bonds legacy, and the remaining one third served as working capital and capital expenditure.

About a year after Mr Chen’s cash injection, he joined the company as its President. In May, when its name was changed to HanKore (from Bio-treat), he was appointed CEO.

He brings lots of industry experience to the table. Before joining HanKore, Mr. Chen had founded and headed Beijing Revolution Science and Technology, a leading environmental protection and wastewater treatment solutions provider with over 30 types of water treatment technologies.

“The anchor shareholders who invested during our restructuring last year have a strong network and expertise that will help us expand in China,” said lead independent director, Mr Felix Yau.

Suzhou Venture Group is a sovereign angel investor with access to much resources and brand influence. 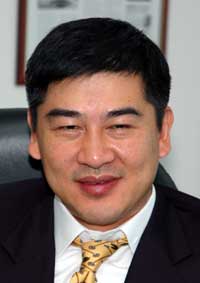 “Our new shareholders have deep insight into the sector and will be able to help the group’s development," said director Felix Yau. Photo by Sim Kih

Dezhou Capital is a major shareholder for 9 companies listed in China, of which two are water treatment companies (Xinrong and Hongcheng Water).

”Dezhou Capital made the decision to invest very quickly after it inspected our plants and business,” said Mr Chen. He believes they were impressed by Hankore’s high standards in managing water treatment plants as well as the group’s assets.

Ancient Jade was founded and is owned by HanKore’s director, Mr Lin Zhe Ying, who joined HanKore in May. A former deputy director at the Ministry of Commerce, he was a key official who represented China in its negotiations over WTO’s rules in commercializing the water treatment sector and pioneered China’s policies on the sector.

“The water treatment sector has high barriers to entry. It is not only a matter of internal management but one’s resources have to match the state of development of the industry,” he said. That is the reason for bringing in the strategic investors.

As a result of the corporate restructuring, there was an overhaul in the senior management team and board of directors as well as internal controls and corporate transparency. 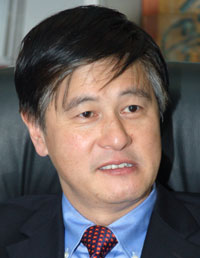 This is a management shuffle that HanKore needs into order to grow, according to Mr Chen.

”Municipal customers are telling us that our wastewater treatment plants are now much better managed,” he said.

“For example, our water treatment plants at Lianyungang (in Jiangsu), Xianyang (in Shannxi), Binzhou (in Shandong) that formerly received notice from authorities that we needed improvement are now receiving accolades instead,” he said.

And that has enabled HanKore to secure the green light to proceed with the second and third phases of the water treatment projects, which will ramp up capacity.

“I foresee a golden era of growth in China’s water sector in the next 5 to 10 years. The sector’s development in the next 3 to 5 years will benefit businesses like HanKore’s,” he said.

So golden era in China does not benefit all. Sad to see the state of HK px at .0036cts SGD.

Will we see the phoenix rising from the ashes or do we see a roasted pigeon over the bbq fire.
Quote
Refresh comments list
NextInsight.net

We have 549 guests and no members online