SINGAPORE STOCKS that have soared despite market tumble 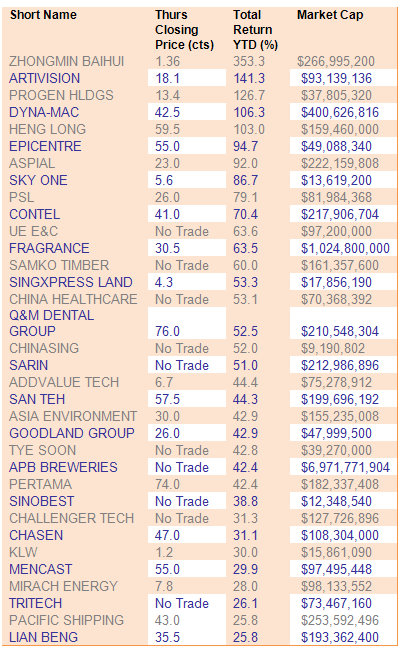 Total return, including latest dividend, of top performers year-to-date, as at 13 Oct 2011.

THE SINGAPORE MARKET has been a scene of terrible sell-downs, especially in the last few months but hey, there are stocks that have still managed almost miraculous gains ranging from 25% to over 300%. Just see the table we have compiled on the left.

More than 15% of stocks listed on the SGX are still above water compared to what they had started out with at the beginning of the year.

Just what are some reasons for their performance? We take a quick look at a few of them:

Zhongmin Baihui is an operator of shopping malls in Chinese province of Fujian, where numerous second-tier cities are experiencing a boom in urbanization and per capita disposable income.

The Zhongmin Baihui retailer brand name has been around for 14 years, but it was only in 2009 that the company started merchandising its own inventory with the opening of its first self-owned store in the key Fujian city of Xiamen. 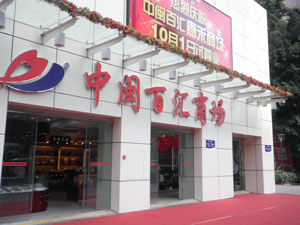 Zhongmin Baihui is a household name in Fujian. Photo by Kathy Zhang

With the momentum from merchandising, revenue from direct sales in 1H2011 (mainly from its hypermarket) ballooned more than 8-fold.

The company has embarked on an aggressive expansion plan to ramp up its network of self-owned stores.

It clocked pre-tax profits of Rmb 13.2 million, compared to a pretax loss of Rmb 8.9 million in the preceding period.

A leading processor of timber products in Indonesia, and one of the world’s largest tropical hardwood plywood producers, Samko Timber has a turnaround story.

It incurred losses for the past 3 financial years and returned to the black during the first quarter of this year.

After it diluted its interest in a loss-making former subsidiary, Sumalindo, Samko Timber managed to generate 1H2011 net earnings attributable to shareholders of Rp 30.3 million (about S$4,000).

Impairment of investment in Sumalindo (amounting to Rp97 billion in FY2010) had previously bogged down its performance but now Samko is ready to start on a fresh slate. It plans to move to upstream activities such as tree planting, plantation expansion, R&D to enhance wood species and develop products with eco-friendly applications.

The stock last closed at 12 cents versus 7.5 cents at the start of the year.

The professional mover of industrial equipment has a “resilient” business, according to SIAS Research analyst Liu Jinshu, who has a target price of 58 cents for the shares.

NRA Capital has a target price of 56.5 cents.

Chasen’s core competency in handling high-tech equipment has landed it multiple contracts from the semi-conductor industry and downstream players.

It has over the years acquired a number of companies that helped it expand its technical and engineering capabilities, and thereby enlarge its customer base by offering a wider range of services.

As China moves away from low-cost labor intensive sectors to high value add production, factories there will increasingly need a specialized mover like Chasen for sophisticated production lines. Vietnam is another fast developing market that Chasen wants to expand in.

The stock closed at 47 cents on Thu, compared to 36 cents at the start of the year.

The direction of Mencast’s stock price started to diverge upward and away from the broad market downtrend, after CEO Glenndle Sim explained in an investor briefing on 19 Aug regarding the strong prospects arising from its acquisition of two offshore solutions providers.

In May, it acquired Top Great Engineering & Marine, a market leader in providing engineering design, procurement, fabrication and installation of structural and precision engineering systems and plants. Top Great has factories in Malaysia, Indonesia and Oman.

In June, it acquired Unidive Marine Services, the one and only service provider of topside rope access and subsea diving services for the marine industry. Diving service is a boon to inspection, repair and maintenance work in the subsea sector.

Mencast closed on at 55 cents on Thu, compared to 41 cents at the start of the year.

The earnings surge arose mainly due to a gain of S$7.9 million on sale of property, without which 1q2012 profit before tax would still have grown 14% on the back of a revenue jump of 21% to S$135.8 million.

The company is performing well in its construction, property development and ready-mix concrete segments -- it had a huge order book of S$761 million as at 31 Aug.

0 #3 Winston Chiam 2011-10-24 17:08
Comparison of 3 Construction Companies:
Lian Beng, Low Keng Huat & KSH Holdings.
All 3 companies made regular profits for the last 3 years.
All their Net Assets increased respectfully.
Comparing their current prices versus their all-time-high price, KSH Holdings is the lowest.
Comparing their dividends paid out for the last 3 years versus their current prices.
Last 3 yrs. KSH paid an average dividend of SGD 0.02 divided by current price of SGD 0.22 works out to about 9.1% dividend yield. KSH looks good.
Quote
0 #2 Green-tea 2011-10-15 18:13
It's a near-certainty that stocks will have a lot of upside next Monday and --- hopefully - for the rest of the week, as I expect a steady flow of positive news from Euro & US. I wish everyone good luck -- it's time to make some $ back! What to buy? I am looking mainly at S-chips. Eratat does look v tempting. Ditto for World Precision Machinery, China Minzhong and Sino Grandness. Pls share your stock ideas, people
Quote
0 #1 Pricey 2011-10-15 10:52
Lian Beng is a bit of a puzzle. Even though its fundamentals are really good, with a huge orderbook & consistently good performance in the past, the stock PE is low at around 3-4X. Does anyone know if this is characteristic of construction stocks? I seem to think so
Quote
Refresh comments list
NextInsight.net

We have 912 guests and 2 members online