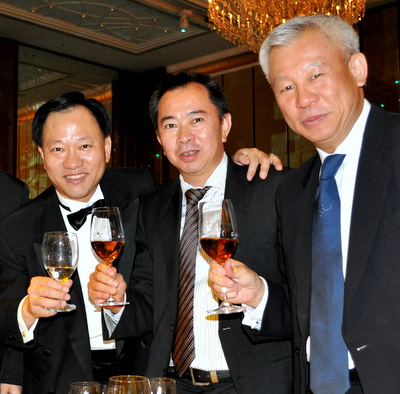 Derek Goh (extreme left) celebrating his Asia Pacific Entrepreneur of the Year award in 2010. He has just won another award over the weekend: one of four Ernst & Young Entreprenuer of the Year 2011 awards in the electronics distribution category. File photo by Leong Chan Teik

Competing in the tough electronics distribution industry in Asia Pacific, Serial System is targeting to reach $1 billion in revenue over the next few years.

The success of Serial has, over the weekend, landed its executive chairman and CEO, Derek Goh, one of the four Ernst & Young Entrepreneur Of The Year awards.

With that in the bag, Derek and Serial System have another target to shoot for.

Last week, he and his management were on a roadshow in Taiwan to tell the Serial story to Taiwan investors.

Serial is seeking to raise funds in Taiwan by selling 28 million TDRs (equivalent to 84 million shares), and intends to use the unspecified proceeds to beef up its working capital, strengthen its financial structure and improve its current and gearing ratios.

Come early Oct, the TDRs will list and start trading on the Taiwan stock exchange.


Below is a summary of recent reports in at least 8 Taiwan print media on the leading semi-conductor component distributor. 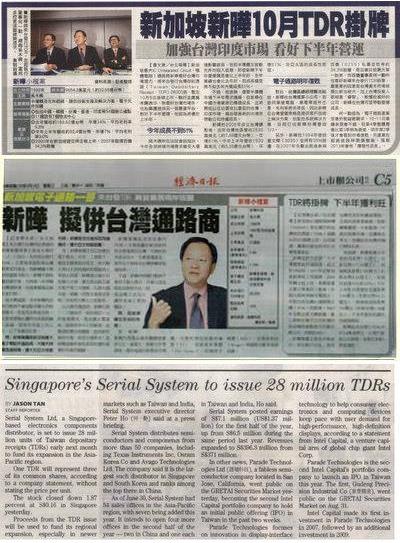 Asia has been driving demand for the global semi-conductor sector, and this has been boosted by China’s growing demand for technology in its green sector.  (This includes wind power, solar power, transducers and other energy saving products).

Demand for semi-conductors is also being driven by technological developments in consumer electronics, smart phones and other 3G products.

As one of the top 3 semi-conductor component distributors in China, where it grew revenues by an impressive CAGR of 66% over 2001-2010, Serial System is looking at expanding its business footprint to Taiwan.

The semi-conductor market in the Asia-Pacific region had a CAGR of 6% over 2006-2010 and CEO Derek Goh expects Asia’s semi-conductor sales to outperform the global market over the next 3 years.

He is bullish on the sector’s growth outlook for China, South Korea, India and other Asian markets, and the Taiwan listing is part of his growth plan.

”Taiwan has a cheaper fund raising platform and is also part of our expansion plan for Greater China.”

It is also the largest semi-conductor component distributor in South Korea and Singapore. Its India business is also growing rapidly, with top line CAGR of 41% over 2007-2010. It is also well established in Southeast Asia and Hong Kong.

It represents over 50 manufacturers, including Texas Instruments, On-Semi, ADI, Avago, TE Connectivity, Osram and Ramtron. It has 7 logistic centers, a network 54 of distribution points in 11 countries with a headcount of 680 and over 5,300 customers.

Based on past trends, Mr Goh expects the company’s 2H2011 results to outperform 1H2011. 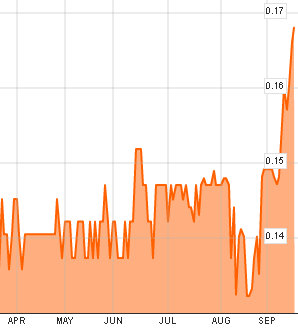 With each Serial TDR representing 3 shares, the Taiwan listing will result in minimal dilution of shareholder value when compared to other TDR issues by other Singapore listcos.

“We place great importance on shareholders’ value and have not issued any new shares since IPO,” said Derek Goh.

Another point to highlight: Serial's dividend yield has always been as high as 6% to 9%.

The stock price has been resilient during the past year despite the turmoil in the broader market. At 16.8 cents last Friday, it was in fact at its highest closing price in the year to date. 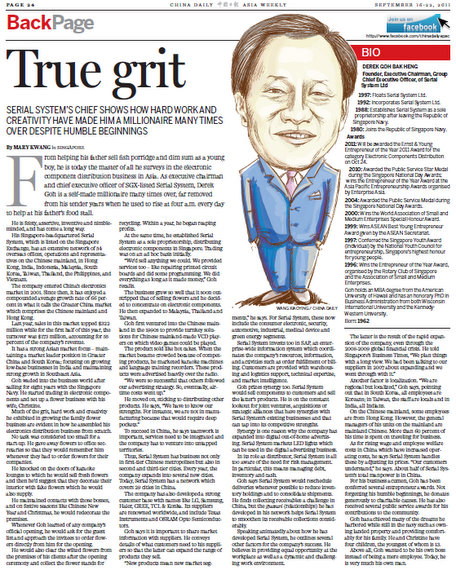 Derek Goh was featured in China Daily too.

We have 2661 guests and no members online