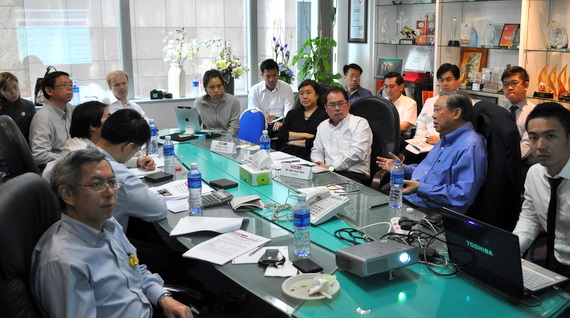 STAMFORD TYRES, a leading distributor of aftermarket tyres and wheels in Southeast Asia, has been riding on the strong growth of vehicle sales in South Africa and China.

Revenue increased 10.0% to S$341.4 million as the company grew its topline in South Africa, North Asia and South East Asia. 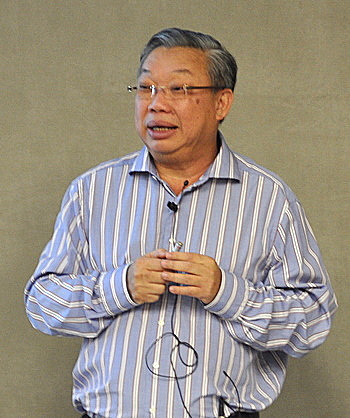 ”Our operations in South Africa are now stabilized after 3 years of gestation,” said CEO Wee Kok Wah, who met about 15 investors at its results briefing on Thursday.

South Africa’s automotive industry resumed its turbo-charged growth after the financial crisis. The local market for passenger cars and commercial vehicles is expected to grow 12.6% this year to 555,000, according to a report dated 29 Apr 2011 by the National Association of Automobile Manufacturers of South Africa (NAAMSA).

The association expects annual growth to exceed 10% over the next 3 years.

”There are only about 4 or 5 local tyre and wheel distributors in South Africa and we are one of the first overseas players to foray there,” said Mr Wee.

It has abundant natural resources for hard commodities and demand from mines for earthmover tyres is coming up, he said.

The vehicle population in China increased by 19.2% last year. China has been the world’s largest auto market since overtaking the United States in 2010, when the Chinese bought 18.06 million vehicles, an increase of 32.4% over 2009.

By far, the biggest sales contribution came from its established markets in Singapore, Malaysia and various parts of Southeast Asia which collectively accounted for 76.7% of group sales. 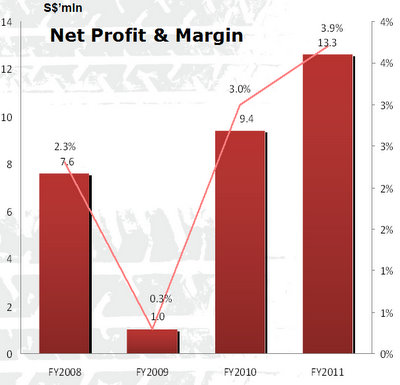 A first and final dividend of 1.5 Singapore cents per share translating into a payout ratio of 26.5% has been proposed.

Stamford Tyres is the sole distributor in about 15 countries for major international brands such as Falken, Continental, Dunlop and Toyo and also has proprietary brands like Sumo Firenza, Sumo Tire and SSW Wheels.

It has distribution centers in Singapore, Malaysia, Indonesia, Thailand, China, Hong Kong, South Africa, India and Australia and is represented by over 4,000 third-party retail outlets in over 90 countries worldwide.

Below is a summary of questions raised at the results briefing and the replies given by Mr Wee and CFO Conson Sia.

Q: What is the breakdown between your distribution and manufacturing businesses?

About 90% of sales come from distribution and 10% from manufacturing.

Q: Have you considered growing your retail network?

The wholesale business is much easier to handle operationally. Retail has problems such as theft as well as high manpower and rental costs. 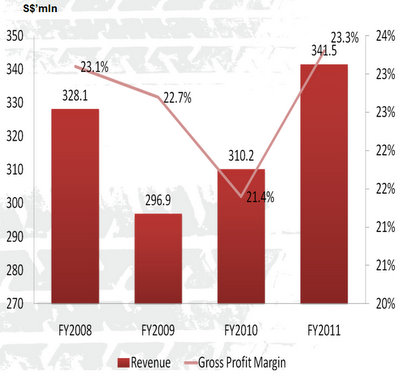 Q: Does the operation of proprietary retail shops affect your inventory levels?

Q: What were your total tyre sales last year?

Q: What is your capex going forward?

We foresee we will need about S$8 million next year. This will be for our wheel plant, tyre moulds for proprietary brand tyres and the rest for the purchase of delivery trucks for logistics.

Q: How do you build up in-house brands?

Q: Do you have a strategy to contain your forex exposure?

We look for domestic bank lines in the country of distribution. For Singapore, we have a natural hedge because we sell in USD and buy in USD. The USD has been depreciating about 6% to 8% per year.

And now, watch Mr Wee being interviewed on CNBC Asia Squawkbox (after a brief advert)....

We have 1322 guests and no members online