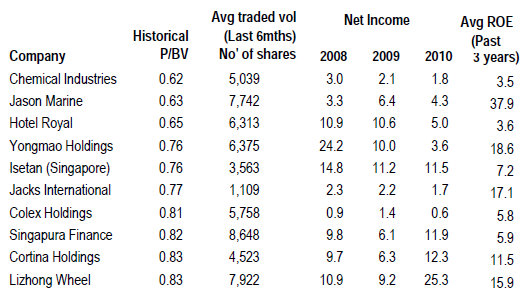 Pertama Holdings announced that Harvey Norman Singapore (HNS) has presented to its Board of Directors to seek a voluntary delisting of Pertama from the SGX.

HNS intends to make an exit offer of S$0.65 per share (13% above its last traded price prior to announcement); which is approximately 1.55x historical P/BV.

As anticipated, its stock price surged 11% to S$0.64 upon the lifting of its trading halt to negate any potential for arbitrage.

Recall that just late in May 11, Allgreen Properties announced that it will be privatised. The offer price of S$1.60 for Allgreen was 39% above its last traded price prior to announcement and also 0.96x historical P/BV.

Though the premium on the offer price differs for both privatisation bids, there was at least one common factor: Investors would have made money if they had spotted these potential privatisation candidates prior to the announcement.

It is not difficult to explain the existence of premium on exit offer price over the last traded value of stocks; existing shareholders need “sweeteners” (incentives) to be persuaded to part with their assets.

• What we have done for you: Common reasons for privatisation bids include poor valuations, lack of trading liquidity, high costs of maintaining listing status etc.

• What you could do: To play the “privatisation” theme, we would BUY companies which are cheap (trading below book value) and have achieved good return on equity (ROE). Top 3 counters which stand out from our list include Jason Marine, Yongmao and Jacks International.

S-CHIPS: Which are next possible privatisation candidates?

We have 1839 guests and no members online