When Serial chairman Derek Goh spoke at a CIMB event last April, the stock price of Serial was 10 cents. It is now 15 cents, up 50%. Photo by Cheng Siew Hooi 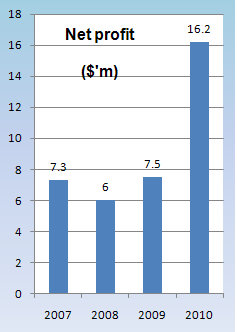 note: 2007 profit includes a $7.1 million gain from the disposal of interests in a listed Taiwan company.

Two days ago (Friday), Serial System announced that its 2010 profit came up to a record $16.2 million, which is a good 36-62% higher than those analyst’ forecasts.

As the year unfolded, Serial System had enjoyed “stronger demand for electronic products in all the Asian markets where the Group operates, supported by a recovering semiconductor industry and an improved global economic and financial environment.”

Also helping to boost the bottomline was a higher fair value gain on the Group's investment properties in Singapore and Taiwan. The fair value gain was about S$2.3 million (FY09: S$0.6 million)

On two key things, the management has proven to be consistent in its guidance to the market:

a) Business growth: In Sept 2010, Derek Goh, the executive chairman, said at a CIMB event that Serial had a track record of achieving above-industry rate of revenue growth. Its compounded annual growth of 16% between 2005 and 2009 was almost twice as fast as industry’s 9% rate in Asia Pacific.

He said "Serial has 'significant room to grow...." 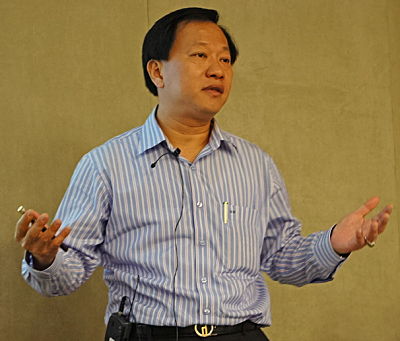 b) Dividend payout: In April, Derek Goh said at the AGM that Serial would pay 40-50% of its net profit as dividends. See: SERIAL SYSTEM: Good turnout to hear upbeat business presentation.

For the interim results of 2010, Serial had also paid out a higher dividend of 0.28 cent, compared to 0.13 cent previously.

The total payout of 0.95 cent a share for 2010 is about 44% of its earnings, continuing a trend of such high payout ratios.

Another reason for shareholders to cheer is the resilience of Serial's stock price.

Despite its TDR application being not approved last November by the Taiwan authorities and despite the market volatility of the last few weeks, Serial shares have held steady at around 15 cents. (By the way, Serial is looking to re-apply for a TDR listing)

The stock price is close to where the three analysts last April had said it would be: Their target prices were 16 cents, 14 cents and 14 cents.

We have 371 guests and 4 members online