CHINA GAOXIAN: Answers to investors' questions ahead of dual listing

Notes from yesterday afternoon’s meeting with more than 30 investors, which lasted an hour and a half, at Suntec City.

(Daewoo Securities officials explained the process for Singapore investors to trade their shares in Korea. We are omitting this as there are a number of technical details - and Gaoxian's CFO said the company would publish an article detailing the process shortly) 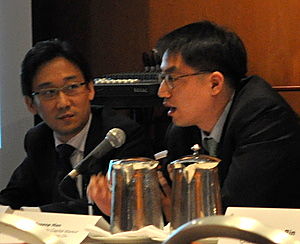 David Lee (left) and Yoseop Han from Daewoo Securities, the underwriter for the dual listing.

“The industry outlook is very positive. Commodity prices are up, as a result of which differentiated polyester yarn is a cheaper alternative to traditional materials. In addition, Gaoxian supplies to the domestic market in China which is a tremendous growth story and Gaoxian is an indirect play on retail consumption in China.

“In terms of its sector, it is a very large player in a fragmented market where the players eventually have to consolidate. As a result, nine times out of 10, the winner is going to be the one who is the biggest. And Gaoxian is the biggest.”

David went on to touch on Gaoxian’s intention to use the proceeds from the Korean dual listing to move upstream by creating its own PET chips supply in order to expand its profit margins.

Another positive point: “Compared to its peers in Korea on a trailing 12-month basis, Gaoxian is heavily discounted by about 50% to its Korean comparables.”

Q: If the stock is attractively priced compared to its Korean peers, why were the Korean Depository Receipts (KDRs) sold at the equivalent of 40.53 Singapore cents per share (a 8.70% discount to the weighted average price of S$0.4439 for trades done on the SGX-ST for the full market day on 10 January 2010)?

a) Every 20 new Gaoxian shares (out of the 600 million new shares) will be packaged as a KDR. This is the first time that such an instrument is being listed on the Korean Exchange, and there is apprehension among some investors that Daewoo Securities had spoken with.

Said Mr Lee: “We think this concern is unwarranted and it will not be a concern any more once the shares are listed and the stock price appreciates.”

b) Gaoxian stock price has appreciated by some 60% since mid-December.

c) From the time investors picked up Gaoxian’s shares to the time of their listing on Jan 25, these investors would not be able to trade the stock even as its price in Singapore fluctuates.

Mr Lee said: “After the dust has settled, people will see Gaoxian for what it is – a strong company with a net profit margin of over 20%, its valuation is very attractive. Its fundamentals will drive the stock price. “

Over 30 investors attended the event yesterday. 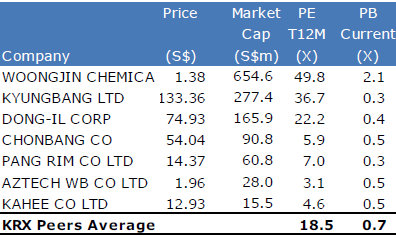 Korean peers of Gaoxian trade at an average of 18.5X PE. Source: UOB Kay Hian
Q: Why list the shares as KDRs in the first place if this is the first such case and it raises some concerns among investors?

Raymond Wong: We studied the pros and cons of a Korea listing, and also direct shares versus KDRs. There would be more requirements for direct share listing – for example, we may have to set up a Korean share registrar, and make more changes to our M&A (Memorandum and Articles of Association). And it would take longer for the shares to be converted from Singapore to Korea, and vice-versa.

Q: Will there be a market maker or stabilizing agent when the Korean shares begin trading?

David Lee: Under Korea law, there cannot be ‘stabilising action’ for the stock. If we do make the market, it is considered market manipulation. But we will have coverage in terms of research and our sales people will talk to their clients continually – both international and domestic. And we will periodically take the company on roadshows in Hong Kong and Korea – and subject to the company’s schedule to Europe as well because this is a good story for them as well.

Raymond: I’d like to add that Gaoxian will appoint an investor relations company in Korea.


Q: What percentage of the 600 million new shares was taken up by institutions? What proportion were Korean institutions as opposed to global institutions?

David Lee: The split is 70% institutional and 30% retail for the 600 million shares. There is no lock-up period for the shares. Morgan Stanley, Deutsche Bank and Nomura took up sizeable chunks of the deal … the majority were taken up by Korean institutions.

Q: What was the oversubscription rate for institutional and retail tranches?

David: About 4X for the institutional demand. Given the various investor concerns that I have mentioned, this 4X subscription rate is a good one. The retail shares were sold on a first come first served basis, so once they were taken up, we didn’t accept any more deposits.

CHINA GAOXIAN: "Come to our investor meeting on Mon at Suntec City"

We have 248 guests and 2 members online