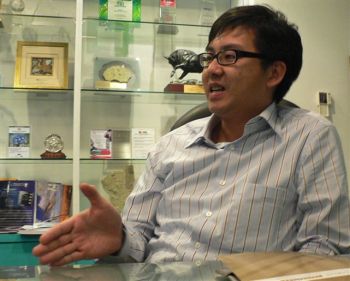 It is riding on the start of a three- or four-year uptrend in its industry of manufacturing equipment that produces optical discs such as DVDRs.

Anwell is the second largest such manufacturer in the world after Singulus of Germany. Anwell and Singulus are about the only ones alive after the severe industry downturn and consolidation of 2005-2006, and it has positive implications for them.

Better still, Anwell is set to include the contribution from three newly-acquired companies to its top and bottom line. In the first 8 months of this year, the trio chalked up a total of HK$66 million in net profit on more than HK$500-million sales.

Going forward, sales are expected to rise as their production capacity is currently being expanded. More good news: Ken said that Anwell is pushing into 2 new areas of business.

* Anwell is on the verge of penetrating a new market, the Middle East, to sell its equipment for manufacturing optical discs.

* It expects to make its maiden sale of equipment for making OLED panels (for MP3, mobile phones, etc) to customers in China next year. Profit margins for this business are much higher than for Anwell's optical disc manufacturing equipment business.

“When we want to diversify into another industry, we look for something with similar technologies. We position ourselves not just as a company for the optical industry but as a high-tech equipment manufacturer located in a low-cost country.” 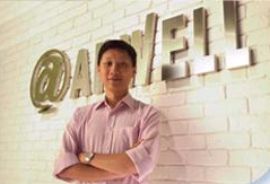 
Anwell's current and only business of making equipment for manufacturing optical discs is on the upswing, as reflected in the Q3 results:

* Operating profit improved to HK$19 million from a loss of HK$9 million.

Due to the accounting treatment for the fair value of convertible notes signed a few months ago, Anwell had to write off HK$9 million from its Q3 net profit. Net profit thus stands at HK$6.3 million versus a HK$10.8 m loss previously.

“In the next few quarters, the convertible notes will have some impact on the bottomline – it may be a positive or negative impact,” said Ken, adding that the calculation for it is complex and an external valuer does the job using a binomial model.

Boom in sale of DVDRs

While demand for Anwell’s equipment is rising, the finished product - optical discs – too is enjoying a surge in sales worldwide. That bodes well for Anwell which, on Nov 7, completed its HK$449-million acquisition of three manufacturers of optical discs – Umedisc in Hong Kong, and Media Delta and Metroworld in China.

They will contribute two months (Nov and Dec) of their performance to Anwell’s top and bottom line for FY ‘07. With the acquisition, which was paid for through the issue of about 1.33 billion new Anwell shares at 6 cents a share and HK$50 million in non-convertible notes, Anwell is vertically integrated: not only does it manufacture equipment that makes optical discs, it also manufactures optical discs themselves. And it does so from China, where the relatively low operating costs will enable it to perform better than its Taiwanese rivals.

Franky Fan, Anwell chairman and CEO, said: “With this acquisition, we are the world’s only optical disc manufacturer capable of producing its own manufacturing equipment. This will give us a significant cost and efficiency advantage over our competitors.” 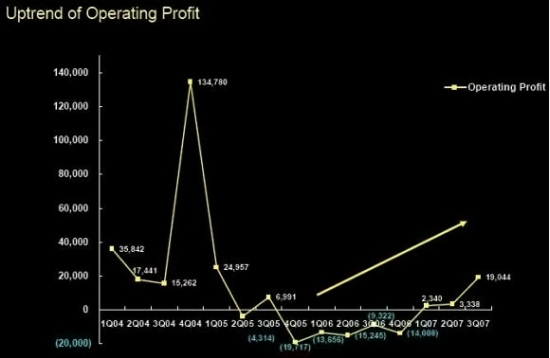 Here are highlights of the Q&A session analysts had with Ken Wu after the Q3 results were announced:

Q: Was the increase in sales of the 3 disc manufacturers this year due to expanded production capacity?

A: Not entirely: 20-25% of the sales came from purchases from other suppliers.

Q: What’s Q4 looking like? Will you be able to realize most of your order book by year-end?

A: Yes, we can realize most of the order book and there’ll be a positive impact from the disc-manufacturing businesses.

Q: During the past good years, Q4 was the best period. Is that going to continue?

A: In the past, we relied on Chinese customers who are busiest in Q4, and we had only the recordable disc business. Now we have a global market and the pre-recorded disc business, so we are more diversified and the seasonal effect is not there. 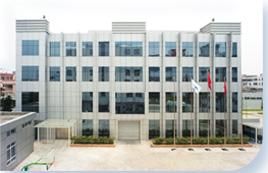 Q: For the disc-manufacturing business, is Q4 the highest production quarter in the year?

A: Usually, Q3 and Q4 are the best because the consumer market is the best during the Christmas season. The order book for our disc manufacturing business has been very good. And because of the scale of our group, our purchase price for polycarbonate and some other key materials are lower compared to a year ago. So, the gross margin for this disc business has improved compared to a year ago.

Q: Is Anwell affected by the rise in oil price?

A: No. Oil price is one of the factors that influence the price of optical-grade polycarbonate but it is not the most important factor. We are one of the biggest customers of suppliers in HK and China, and we are getting better terms and prices.

Q: Why are you expanding capacity for your disc manufacturing?

A: Our capacity utilization now is more than 90%. To us, that’s almost 100% because some machines are going through modification. If we expand capacity, we target to have a return period of two years: Every dollar we put in will have to come back within two years.

Q: Can you comment on the stock purchase by 3 directors recently?

A: We – the CEO, COO and myself – are major shareholders and we are of the view that the current stock price doesn’t reflect the true value of the company. Instead of investing in property or other shares, we think our company is a good investment for ourselves.

We have 1105 guests and 2 members online