MARCO POLO MARINE: Should I cut loss or continue to hold?

Henry Tiong says he is an average Singaporean in his early 30s, has a full-time job, is happily married and caught within the sandwich class. He lives in an executive condominium with a "mountain-like mortgage". "My goal is to achieve financial freedom as early as I can. My target is 45 years old. I don't mind working but I hope to provide my wife an option not to work." The following article was recently published on his site Valuestocks.sg and is republished with permission.

Marco Polo Marine had a stellar FY 2012. After-tax earnings topped $21 million which was a 23% increase from the previous year. This worked out to be 6.3 cents per share. Marco Polo Marine was trading at just under 7 times P/E multiple.

Net asset per share was 41.4 cents, which just about matched the price I paid for. The forward-looking story appeared intact - Indonesian cabotage law kicking in and presented a great opportunity for Marco Polo Marine which has indonesian ship-chartering operations. The macro picture makes sense.

There were warning signs though - one time, non-recurring gain on equity interest of $5.9 million (BBR), a significant rise in interest expense from increased borrowings, a huge impairment loss of $1.1 million in trade receivables.

There were indications from management's commentary that the ship building & repair operations may not hold up as well as initially thought under "subdued economic conditions".

The share price remained subdued at 38 cents for much of 2013. 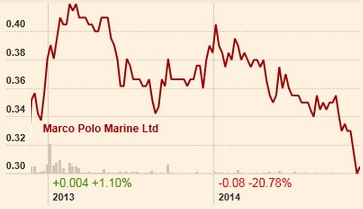 Marco Polo Marine (30.5 cents) has a market cap of $102 million and trailing PE of 8.6X. Chart: FT.comQ1 earnings dropped 28% to 0.95 cents per share compared to the previous corresponding period. One thing grew in that period - borrowings.

Q2 2014 managed to outdo Q1 by recording an earnings figure that was 72% lower than previous corresponding period. On a half year basis, earnings were down 57%.

Full year 2014 just finished things off with a Q4 earnings figure that was 40% lower than the previous corresponding period. Overall FY 2014 earnings were 59% lower than 2013's.

Could I have avoidedthis blood bath?

If I had followed my own investing guidelines, I would not have bought into Marco Polo Marine. I should also have cut loss earlier based on the warning signs. But I was bird-watching and caught out by Mr Market.

I prefer to buy stocks that has net cash. 2012's balance sheet showed that Marco Polo Marine had $16 million of cash and cash equivalents, which is a fraction of the borrowings total of $54 million.

Hindsight bias I know. =) Anyway, since I am already vested, should I cut loss or continue to hold?


Holding Onto A Loser:
Warren Buffett once said: "Should you find yourself in a chronically leaking boat, energy devoted to changing vessels is likely to be more productive than energy devoted to patching leaks."

In other words, if you have invested in the wrong shares, then buying something better might be preferable to patching up past mistakes.

To average down is to increase your lost.

However, learning how to let go is vital if you want to take the first important step to become a better investor. After all, if your limited resources are tied up in patching up what you have, then you are much less likely to look for something else that could serve you better.

When we invest, we should always bear in mind that buying shares is about putting your money to work. That means looking at opportunities that will deliver the best possible returns for our capital.

That also means looking dispassionately at each of our holdings and deciding whether it merits a place in our portfolios. An often telling question is whether you would still buy a particular share if you did not already own it.

If the answer is no, then why are you still holding it?
Quote
0 #2 Rock 2014-11-27 16:07
Personally I will sell the losers. Why stay on leaking ship? There are many promising growth and under value property stocks around. Remember holding onto stock has a cost. So holding onto losers means miss out opportunity cost plus the lost of value.

What happen the share price sudden increase. What happen white knight focus on the loser stock you are holding. Chances are very usually very slim. Never, never reqard when you sell off when the share you sold suddenly attract interest. There are many, many opportunity in other stocks.

Very important is to manage your risks on your porfolio. Keep the winners and sell the losers. (I have list out in the forum under "Sound Investment.")
Quote
0 #1 Cut flesh 2014-11-27 12:47
Please cut your loss .... loss ..... loss....
Then you will have a clearer picture.
Quote
Refresh comments list
NextInsight.net

We have 235 guests and no members online