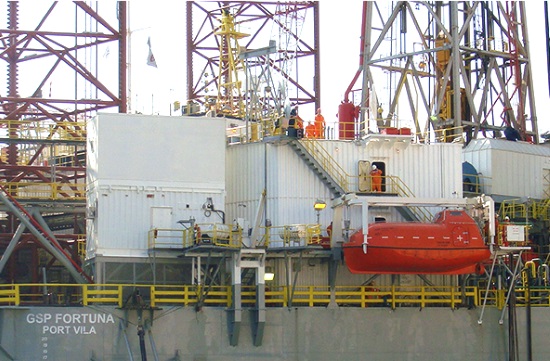 Swissco has extended its offshore fleet to include oil rigs, with the injection of oil rig charterer Scott and English Energy by Double Dragon Energy Holdings which is majority-owned by Kim Seng Holdings. Above: Scott and English's jack-up drilling oil rig, GSP Fortuna.
Company photo
SWISSCO HOLDINGS made its maiden entry into the oil rig leasing market on 30 July when it completed its acquisition of 100% of Scott and English Energy, which owns and leases mobile offshore drilling and service oil rigs, for S$285 million.

"The acquisition enables us to offer the full spectrum - from offshore support vessels to oilrigs," said Swissco CEO Alex Yeo at an investor briefing this week.

Arising from the acquisition, changes were made to the composition of Swissco's board and its committees. "Our new chairman (Tan Fuh Gih) is one of the founding members of KS Energy. His oilfield experience is invaluable to our know-how and resources for the provision of upstream oilfield drilling services," he said.

Mr Tan and his brother, Tan Kim Seng, and concert parties now control a combined 63.9% stake in the enlarged Swissco.

“We are not speculators. We buy oil rigs and put in place long term charters that give clear earnings visibility,” said Mr Chua Wei Teck, the CEO of Scott and English Energy and newly-appointed excutive director of Swissco Holdings.

"Based on our existing fleet size and pipeline, we expect about 75% of next year's revenue to be from oil rigs and the remaining 25% from the chartering of our other offshore support vessels," he added. 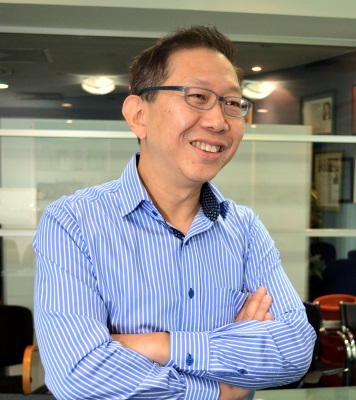 A fourth oil rig is undergoing conversion in the Middle East into an accommodation rig.

This oil rig is expected to commence operations in 4QFY2014 on a 4-year charter contract.

On 15 Aug, Scott and English announced that it secured charter contracts worth a total of US$94.8 million for another 4 offshore drilling rigs from an oil major for 2 years.

The Group expects to complete the acquisition of another 4 operating drilling jack-up rigs by 30 September.

The additional 4 rigs will also be deployed in the Gulf of Mexico.

“We are acquiring 4 older rigs that come with charter contracts,” said Mr Yeo.

He pointed out that as investments in oil rigs entail huge capital outlay, it is the Group’s strategy to acquire assets that are already generating stable cash flow.

It also targets older oil rigs as they require a lower capital investment relative to newbuildings.

Swissco is mindful of a risk with newbuildings: there’s no telling whether long term charter contracts can be signed at good charter rates when the Group takes delivery of the vessels.

To finance its oil rig acquisitions, on 7 August, Swissco inked a deal to raise US$42.847 million through the issue of 43.95 million redeemable exchangeable preference shares to private equities and individuals.

Contribution from the new business segment is expected to significantly boost its financial performance next year.

90% of its 1HFY2014 revenue was generated from chartering its fleet of offshore support vessels that range from anchor handling tug supply (AHTS) vessels, crew boats, utility tugs to accommodation vessels.

Its vessels are deployed in Asia, Australia, the Middle East and West Africa.

We have 1108 guests and no members online