Swissco’s market cap could double by Sep 14, in our estimation, after the injection of Kim Seng Holdings’ Scott & English business, worth S$285m, into its fleet-chartering business.

Earnings are expected to double, with upside only limited by the quantum of the fund injection. We estimate the fair value of the enlarged entity at S$0.36 (7x CY15 P/E) to S$0.52 (10x CY15 P/E), based on the valuations of its Singapore OSV peers.
Mini-Ezion
Scott & English owns and operates four service rigs via a 50:50 JV with Ezion (EZI SP, Add, TP S$2.59). Three are in the Gulf of Mexico (for Pemex) and one in the Middle East (for Saudi Aramco). These operations are backed by long-term bareboat charters of 4-7 years from 2013, with a total annual profit of c.S$20m and strong FCFE of S$14m-16m.
Earnings to double by FY15; 28% incremental upside for each additional rig
Swissco’s existing OSV business made a net profit of S$23m in FY13, triple its S$8m in FY11, thanks to its chartering fleet expansion/renewal and maritime services (build-to-stock vessel sales)

Swissco Holdings has been expanding its offshore support fleet. Company photo
Swissco will take delivery of six more chartering vessels by end-2014 and four in 2015, bringing total fleet from 34 currently to 44. Assuming a conservative growth rate of 10% p.a. for its OSV business, the enlarged entity (after completion of Scott & English’s injection) should achieve a minimum net profit of S$46m in FY15. If Swissco adopts Ezion’s growth strategy, its earnings could further grow by 28% (S$13m p.a.), with every service rig worth US$80m added to its fleet (on a 100% stake).
Fund-raising inevitable
Completion of the deal is expected by Sep 14, which should lift Kim Seng Holdings’ stake in Swissco to 73% from 17%. We believe that a share placement could be its fastest way of expanding its service rig business as Swissco’s net gearing is expected to rise to 0.9x (from 0.6x in FY13) by end-FY14 to support its OSV new-build programme.
Cheap against peers and history
Incorporating Scott & English, Swissco is trading at 7.6x CY14 P/E, cheaper than the 10.4x average for its Singapore OSV peers. It is also trading below its 3-year average of 9x. Completion of the deal or contract wins should catalyse the stock, in our view. 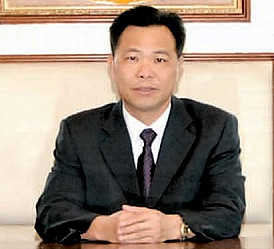 Chen Jianfeng, Executive Chairman, owns 51.6% of China Yuanbang.
Photo: Annual reportInitiate coverage with a fair value of S$0.36. We expect the medium-term growth of China property industry to remain optimistic, given the new urbanization plan will increased demand for tier 2 and tier 3 cities.

The easing of the one-child policy will continue to provide long-term domestic demand growth in China.

Our S$0.36 fair value is based on 30% discount to RNAV, given 97% potential upside; we initiate coverage with Overweight recommendation.

Expect record-breaking year in revenue for FY06/14. The group’s sales jumped 16% yoy to Rmb453.2m in 2Q14 or 37% yoy growth in 1H14 as sales mainly contributed from Phase II of Aqua Lake Grand City which was one of the group’s key projects in FY2013.

Given its Rmb1.2bn pre-sale value was not handed over to buyers as at December 2013 and the group expects large proportion of the pre-sales will be progressively recognised from 3Q14 onwards, we project its FY06/14 full year revenue will be in excess of Rmb1bn and FY06/15 revenue will be driven from Shan Qing Shui Xiu Phase II and Ming Yue Shui An (as at 31 December 2013, Ming Yue Shui An has sold over 30% of its residential units). 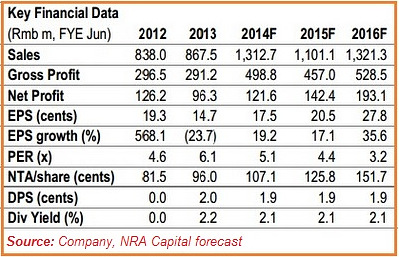 The group started pre-sales of Ren Jie Di Ling in FY2013. As at 31 December 2013, Ren Jie Di Ling generated total contracted sales of approximately Rmb9.3m, with some 38 residential units sold.
The group also had successfully obtained the land use right certificate of its Batai Mountain Project in Wanyuan during FY2013. This is the first project the group has worked together with the PRC government.

It is also the first time that the group has undertaken the development of a tourism property project. The project would be developed in accordance with the PRC AAAAA-grade national scenic area guidelines.

We have 588 guests and no members online