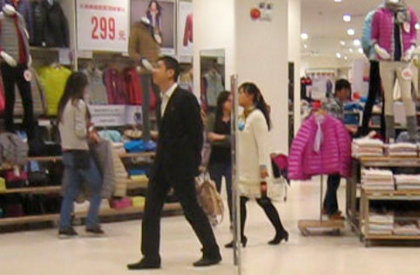 China’s retail sector disappointed in 2012, but 2013 is a whole new ballgame.

So what’s different this time around?

Something must be about to happen with retail shares because 75% of market watchers polled believe the sector will outperform the benchmark Shanghai Composite Index going forward.

And if the Index continues its ongoing uptrend into the current calendar year and into the upcoming Year of the Snake, then that is very good news indeed for holders of shares in shopping malls, department stores and a whole range of consumer goods retailed at the countless shops across the country.

As reference, Chinese shares have shot up nearly 25% since the recent low of 1,949 points was hit in December of last year.

It should come as no surprise that the main impetus for this bullish outlook on the retail sector is the upcoming Golden Week holiday that is the mother of all Chinese festivals: the Chinese Lunar New Year.

Although many cities began hollowing out as early as early February as migrant workers flock back to their native provinces by the hundreds of millions, the official Spring Festival holiday begins on February 10 when the decidedly bearish Year of the Dragon hands the fictional baton to the incoming Year of the Snake.

And given Chinese equities’ bullish performance so far this winter, there is every indication that more of the same is in store.

Speaking of stores, that is the major driver for the upbeat retail sector take by a majority of market watchers as improving GDP growth forecasts and a rising stock exchange put more and more shoppers in a holiday – i.e. buying – spirit.

Hence, the bullish take on retailers.

In fact, some are even calling the confluence of a more bullish bourse and increasingly sanguine economic forecasts for China in 2013 as the perfect recipe for a strong or even explosive revival in retail/consumer themed stocks.

Chinese shopping malls and department stores are constantly trying to attract shoppers away from each other.  Source: Credit Suisse

Furthermore, stock observers point to preliminary evidence showing year-on-year increases in holiday travel back to hometowns which of course necessitates a higher demand for gift-buying activities as well as more leisure time with friends and family which also encourages group shopping behavior to help pass the time.

And it isn’t just an improving economy and stock market alongside the imminent arrival of China’s biggest holiday that has the potential to light a fire under retail stocks.

Central government policy itself is providing ammunition for the pro-retail crowd as Beijing continues to implement measures to not only spur on domestic consumption, but also continues to strive for more income parity in the country – a strategy which by definition creates more potential cash-carrying consumers overall.

Early numbers in from retailers are already trending up year-on-year, and stronger buying activity is not only being reported in Beijing, Shanghai, Shenzhen and Guangzhou, but second and third tier cities as well.

The double whammy of low valuations and deflated sales that characterized Chinese listed retailers for most of 2012 appears to be becoming a thing of the past.

Specific sector plays to keep an eye on include Hefei Department Store Group Co Ltd (SZA: 000417) which is trading near the lower end of its 52-week range.

We have 268 guests and one member online