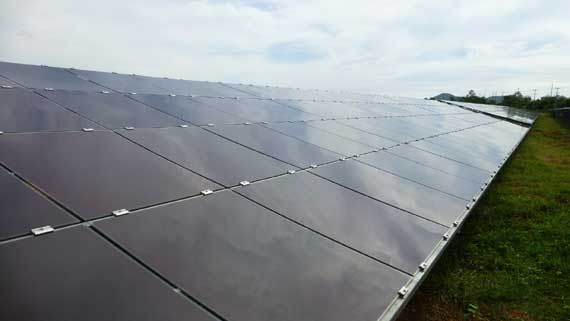 It recently secured its second engineering, procurement and commissioning (EPC) contract to build a solar power plant in Thailand.

In relation to its latest EPC deal, Anwell sold its power producer assets to the investor of the solar farm as follows:

> Its entire stake in Lopburi Solar Co., Ltd., which owns a power purchase agreement to sell electricity to the Provincial Electricity Authority of Thailand.

> Land for developing the solar farm 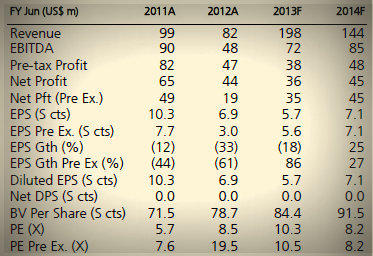 In reinstating coverage of Jaya Holdins, once a market darling in the ship-building sector, DBS Vickers says it is projecting robust earnings recovery from FY12’s trough.

"We believe Jaya’s earnings troughed in FY12 as the group transitioned to its new business model.

"There is upside  potential to our numbers as we have not assumed new vessel orders."

DBS Vickers analyst Jeremy Thia, CFA, has a target price of S$0.85 for the stock, calling it a "recovery play with potential dividend kicker."

"We see a potential re-rating of the stock towards its book value on a strong 86% recovery in FY13 earnings. The potential award of high-value newbuild orders and resumption of dividend payments following the refinancing of its scheme debt are likely catalysts.

The $1.22 offer price is at 13% discount to its last closing price and a 17.5% discount to the weighted average price of the last three months.

This depressed sale price could be primarily driven by the desperation of the STX Group to sell its assets to pare down debts. The STX Group is also looking to sell its shipping unit, STX Pan Ocean.

He believes the general offer is unlikely to succeed for the following reasons:

(1) The offer price is at substantial discount to the current price ($1.40)

(2) Offerer Fincantieri might not get the acceptance level to take the company private.

“Assuming Fincantieri did not manage to get full acceptance to its general offer and the stock stays listed, we believe the change in major shareholder could remove the overhang on the stock and lead to a re-rating of the stock.

We have 1798 guests and no members online