Cinda International said it is initiating coverage on PAX Global (HK: 327) – China’s No. 1  player in EFT-POS (electronic funds transfer point of sale) terminal solutions business – with a “Buy” recommendation and a target price of 2.30 hkd, based on 12.2x FY12E P/E or 20% discount to peers.

“PAX Global is an undervalued leader in e-payment, and ranks third globally. Over the past few years, the company has enjoyed the fastest shipment growth amongst the top players,” Cinda said. 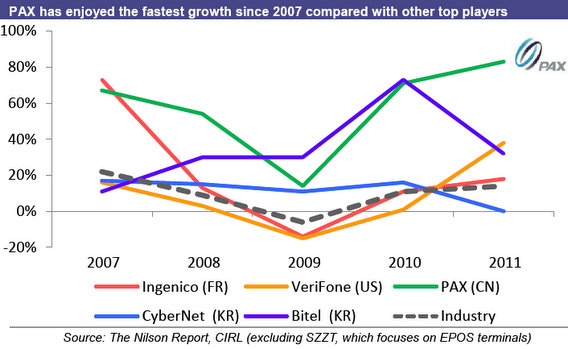 The research note added that potential losses from fraud in the market could be so significant that customers must ensure the terminals they use are up to the highest security standards.

Secular growth due to low penetration and EMV upgrade 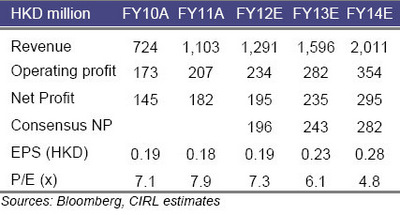 “Growth will also be rekindled in developed markets with EMV (Europay, MasterCard and Visa) upgrades which offer higher security as a means to combat credit card fraud.

“We believe PAX can benefit from these opportunities as well as expand their overseas' market share,” Cinda said.

In recent years, global top players have been pursuing growth through aggressive M&As.

As industry consolidation leads to fewer choices and lower bargaining power for customers, the customers will be more open to deal with other qualified providers. 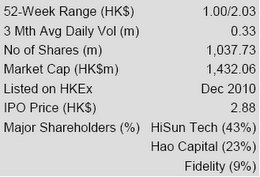 “With fast growing overseas sales, of which GPM is above the company average, the blended GPM will be pulled up.”

“We believe the valuation discount will be narrowed given its growth in global market share,” Cinda added.

Founded in 2000, PAX is the No. 1 and No. 3 EFT-POS terminal solution provider in China and the world, respectively. It is strong in the Asia Pacific and Mideast/Africa. Its major customers are acquiring banks and merchant service providers such as CCB (HK: 939), BOC (HK: 3988), ABC (HK: 1288) and UMS.

Goldman Sachs said it is maintaining its “Sell” recommendation on BYD Co (HK: 1211) due to slower sales of autos and solar products.

In addition, sales volumes of older models such as F0, F6 and G6 were also below expectations; 2) continued losses in the solar panel division due to weak demand and trade sanctions on some overseas markets; and 3) weak gross margin (after depreciation and amortization) at 10.6% vs. 3Q2011’s 14.1% and GHe FY12 13.0% on price erosion and lower revenues and economies of scale.

We have 1895 guests and no members online