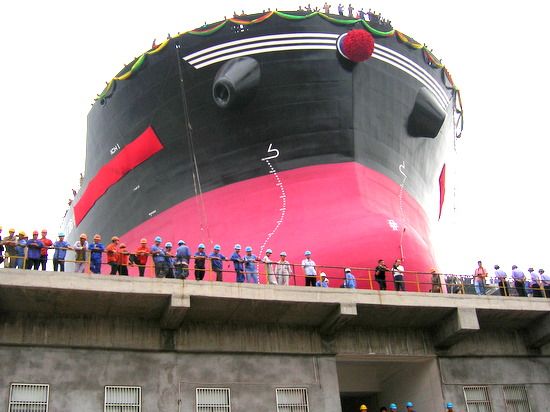 “We believe it has the potential to become one of the global leaders in the shipbuilding/offshore and marine (O&M) industry over the long term, given its low-cost advantage, increasing labor expertise, strong domestic demand, and policy support. We also believe it can double its profits over the next 4-8 years.”

To this end, it is initiating coverage of Yangzijiang Shipbuilding (Holdings) Ltd (SGX: YZJ) with a NEUTRAL call and a 12-month Director’s Cut-based target price of 1.4 sgd.

“Yangzijiang is a well-regarded private shipbuilder with the best margin track record among the three yards (Cosco, China Rongsheng, Yangzijiang). It currently owns three yards and is also building a fourth yard.”

Goldman Sachs added that Yangzijiang’s main focus is on own-design vessels, and dry bulkers and containerships.

“The company plans to diversify into O&M, but has had limited meaningful opportunities so far. Yangzijiang is already in a net cash position at end 2010.” 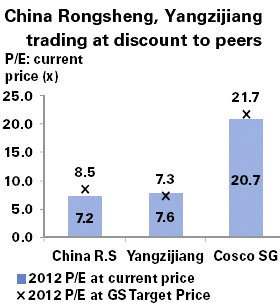 Goldman is BUY on CRS, NEUTRAL on YZJ

“We believe Chinese shipyards could secure higher O&M market share as key success factors for this sector are largely similar to commercial shipbuilding; and diversification into related industries -- higher vertical integration along with more revenue streams.”

To this end, Goldman Sachs said it is initiating coverage of China Rongsheng Heavy Industries Group Holdings Ltd (HK: 1101) with a BUY and 12-month Director’s Cut-based target price of 6.1 hkd.

“China Rongsheng is a relatively new entrant in the market (first order in 2006) but already has the largest order backlog among the three yards (Cosco, China Rongsheng, Yangzijiang). CRS has a strong and highly-regarded management team.”

Goldman Sachs added that CRS has historically focused on dry bulkers and tankers, but is now diversifying into containerships and O&M, and potentially into LNG carriers.

We have 713 guests and one member online