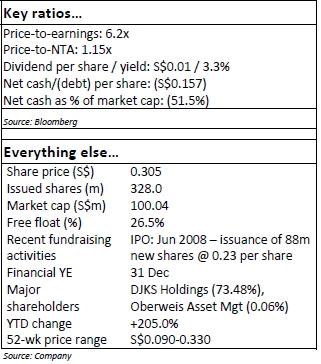 Impressive 9M10 results. Combine Will’s net profit for January‐September surged almost 152% YoY to HK$68.9m on the back of a 62% YoY growth in revenue. This was mainly driven by its ODM/OEM business segment, thanks in part to the launch of a new product (automatic liquid‐soap dispenser) and effective cost controls at the operational level.

Top three automobile moulds manufacturer in China. Besides supplying moulds for its own ODM/OEM business, Combine Will also makes moulds for external parties.

Notably, the group is an approved supplier to automobile part manufacturers that service established car makers such as Honda, Volvo and General Motors. It is also included in the accredited list of automotive Tier One suppliers to Valeo, Delphi and Faurecia. About 60% of its mould business comes from the automobile industry. 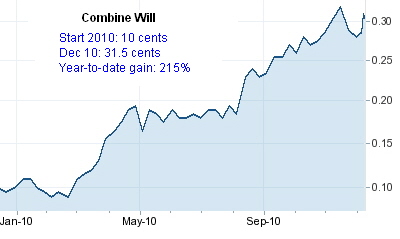 Korea listing likely to be completed by 1Q11. Combine Will is in the process of preparing for its dual listing in Korea and plans to issue up to 11m new Consolidated Shares (10 existing shares into one). Apart from improving trading liquidity and valuation, the proposed listing will enable the group to gain a foothold in the fast‐growing Korean consumer market.

CIMB says Combine Will and ECS are cheap.... 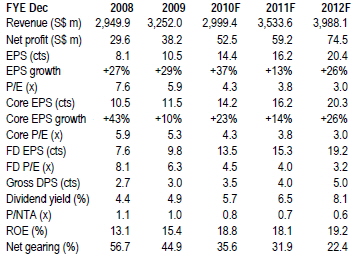 Financial forecasts for ECS by CIMB
• Dual listings. In the KDR/TDR space, Combine Will International (BUY, TP S$0.52) and ECS (BUY, TP S$1.22) are cheap against listed peers and offer dividend yields of 3.5 and 6.2% respectively. With the Singapore market undervaluing these companies, a listing on a foreign exchange is likely to trigger a re-rating.

The share price of ECS's Hong Kong-listed competitor, Digital China, is a case in point, jumping to a record high as the completion of its TDR listing drew near. Digital China now trades almost on par with Taiwanese competitor, Synnex’s 14x CY12 P/E. ECS, on the other hand, is still trading below 4x CY12 P/E.

We have 1010 guests and no members online