Reiterate Add as profitability normalises
We expect JAP to benefit from a continued recovery in demand for various animal proteins, especially given that key ASEAN economies that JAP operates in, such as Indonesia and Vietnam, are expected to see healthy GDP growth above 5% in 2022.

Our SOP-based TP of S$0.81 is unchanged (Fig 1), although we are cognisant of the six-month validity of the listing application for its China dairy subsidiary, AustAsia Investment Holdings (AIH), on HKEX, which will expire on 29 Sep 22 and needs to be renewed. 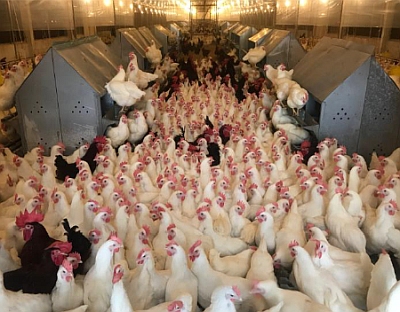 Japfa is, partly, into poultry breeding and farming in Indonesia. Photo: CompanyIn the latest price data provided by JAP (Fig 2), we observe that prices of broiler and DOCs in Indonesia remained resilient in Jul following a seasonally weaker 2Q22 due to lower demand post Lebaran in Indonesia, dispelling our concerns over the weak DOC prices in May, which could have impacted future broiler prices.

Although prices of soybean meal, a key feed ingredient, is back to an all-time high (Fig 3), we think that profitability for JAP’s Indonesia poultry business should remain intact with better ASPs and similar cost base compared to 1Q22, the previous high for raw material prices.

APO: profitability right around the corner
Recovery in Animal Protein – Others (APO) has been a drag on earnings as the resurgence of African Swine Fever (ASF) in Vietnam in late-4Q21 led to weak swine prices that extended into 2Q22, exacerbating the impact of cost inflation from higher feed and biosecurity costs.

However, swine prices have rebounded in 3Q22, with QTD ASP of VND67k/kg (Fig 5), supportive of a turnaround in profitability in 2H22F, which should also benefit JAP as one of the most cost-efficient farmers in the industry.