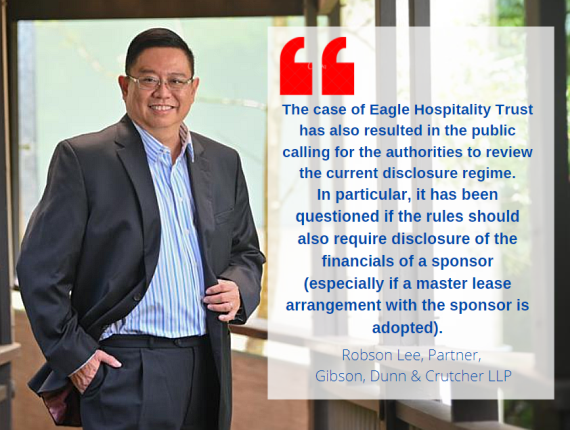 EHT adopted a master lease arrangement under which affiliates of its sponsor (collectively, the “Master Lessees”), Urban Commons, would lease the hotels from EHREIT. The Master Lessees would in turn enter into (a) franchise agreements with various hotel franchisors to operate under their brands and (b) hotel management agreements with third-party hotel management companies to manage the day-to-day operations of each hotel.

Indications that things may be less than perfect surfaced shortly post-listing in October 2019 when an article appeared in the press that EHT had been served with a notice of default by the City of Long Beach in respect of one of its properties, The Queen Mary (a hotel operated aboard a historic British ocean liner which had been leased from the City of Long Beach), as a result of failure to make repairs. The same article also quoted a marine survey conducted in 2017 (the “2017 Marine Survey”) which alleged that The Queen Mary was in deteriorating condition and in need of substantial repairs (collectively, the “Queen Mary Allegations”).

The Queen Mary Allegations were swiftly disputed by EHT, which clarified that there was no default and that the supposed notice of default was merely a “formal request for information by the City”. EHT also called the 2017 Marine Survey’s estimate of the scope of work and costs “grossly inaccurate”. To substantiate its claims, EHT further relied on an independent structural engineer’s report by John A. Martin & Associates, Inc. (which was commissioned by Urban Commons prior to EHT’s listing) which concluded that The Queen Mary “remains in excellent structural condition”. Despite the assurances from EHT, the price of its stapled securities reportedly fell 14%.

In March 2020, EHT called for a voluntary suspension of trading. In April 2020, EHT established a special committee to safeguard value and conduct a strategic review. EHT subsequently appointed a financial adviser and implemented caretaker arrangements at the hotels which were the subject of the notice of termination by the relevant hotel managers.

In May 2020, the strategic review uncovered that the founders of Urban Commons (in their capacity as directors of various subsidiaries of EHREIT) had, on behalf of these subsidiaries, entered into certain interested person transactions which were prejudicial to the interests of EHT and its minority stapled securityholders. This discovery prompted their resignations from the board of directors of the manager of EHREIT (the “EHREIT Manager”) and the trustee-manager of EHBT (the “EHBT Trustee-Manager”).

In June 2020, EHT announced that an initial request for proposal (“RFP”) process conducted by its financial adviser was interrupted by Urban Commons’ entry into a letter of intent with Far East Consortium International Limited (“FECIL”) in relation to FECIL’s proposed acquisition of a 70% interest in each of the EHREIT Manager and the EHBT Trustee-Manager. Against this, the MAS and the Commercial Affairs Department of the Singapore Police Force commenced a joint investigation into current and former directors and officers responsible for managing in EHT in connection with suspected breach of disclosure requirements under the SFA.

Discussions with FECIL, however, collapsed and the trustee of EHREIT (the “EHREIT Trustee”) restarted the RFP process in late 2020, which culminated in the selection of SCCPRE Hospitality REIT Management Pte. Ltd. as the replacement manager of EHREIT (the “SCCPRE Proposal”). The SCCPRE Proposal was contingent on a number of resolutions being passed at an extraordinary general meeting (“EGM”) to be held on 30 December 2020. On or around the same period, EHT terminated the master lease agreements and the EHREIT Trustee also received a directive from the MAS to remove the EHREIT Manager.

On 30 December 2020, the EHREIT Manager was removed. However, not all the requisite resolutions for the SCCPRE Proposal were passed at the EGM held on the same day. In view of the absence of a replacement manager and inability to continue as a going concern because of the depletion of funds, EHT filed for insolvency protection under Chapter 11 of the United States Bankruptcy Code.

As at the time of writing of this primer, EHT has disposed 15 of its 18 hotel properties and also surrendered The Queen Mary back to the City of Long Beach. Stapled securityholders are, however, not expected to receive the sale proceeds as the cash is insufficient to repay all the claims on EHT.

The full document can be accessed here.
The author: Robson Lee, Partner of Gibson, Dunn & Crutcher, LLP (This email address is being protected from spambots. You need JavaScript enabled to view it.)

We have 759 guests and no members online