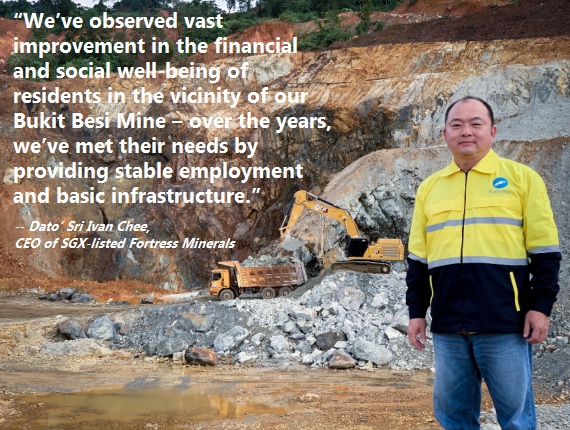 Unit costs also decreased from US$25.32/WMT to US$20.70/WMT with the help of efficiency gains.

The Negative
- Spike in capex. Capex jumped from US$390k in 4QFY20 to US$3.6mn in 4QFY21, as FML expanded its truck fleet and reinvested in its Bukit Besi mine for further exploration works.

Demand for iron ore. According to the World Steel Association, global crude steel production increased by 10.0% to 486.9mn tonnes in the first three months of this year. This spurred continued growth in demand for iron ores. World Steel forecasts that steel demand will grow by 5.8% in 2021 to 1.874bn tonnes, after dipping by 0.2% in 2020.

China’s attempts to cut steel output in 2021 have apparently tripped. According to the China Iron and Steel Association, steel production in March 2021 increased 19.1% YoY to 94.0mn tonnes.

Elsewhere, iron ore supply from Brazil, the world’s largest supplier, has been made uncertain by inclement weather. This bumped up iron ore prices to a 10-year high.

We expect prices to remain above US$110/DMT. Current prices are about US$170/DMT. Malaysia’s production of iron and steel bars and rods drifted down in 4Q20 but production has since risen.

This could be attributed to the Malaysian government’s increased resources for the construction sector, as the economy tries to stage a recovery from the pandemic.

Acquisition of MMSB Group. FML completed its acquisition of the entire issued and paid-up share capital of the Monument Mengapur Group (MMSB) on 7 April 2021. Commercial production is expected to start in FY23e. We have not factored in contributions from the Mengapur site.

We have 311 guests and one member online