Q1. In his statement, the chairman reflected on a hugely successfully 2019 for the group and stated the accomplishments which included:

(i) Would the board help shareholders understand why the net asset value (“NAV”) per share of US$0.13 is considered an achievement when the NAV per share was US$0.15 as at 31 December 2018? 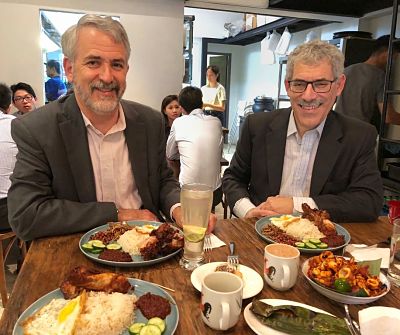 Trendlines Co-Chairmen Steve Rhodes (left) and Todd Dollinger enjoying nasi lemak at The Coconut Club.
File photo.The Chairmen’s comments about a successful year related to our results overall, including fundraising exercises completed for our portfolio companies, the record level of the portfolio value, and the first close of our new Singapore-based venture fund, among other factors.

We also note with some satisfaction that, since the offerings, average daily trading volume in our shares has increased markedly, providing increased liquidity for our shareholders.

(ii) The company is itself an investor of early stage companies. As an investor, did the board consider the dilutive impact to shareholders who were unable to participate (as with the placement) or unwilling to participate in the fund raising exercise that were carried out at a price below the NAV per share?

The Board considered the dilutive impact of the fundraising exercises and rejected the market norm of raising capital in such transactions at a discount to market price.

We also believe that the strategic impact of bringing in Librae Holdings Limited as a controlling shareholder of the Company justified the dilution; since their investment in the Company, Librae has committed US$10 million to the Trendlines Agrifood Fund and has additionally invested directly into multiple portfolio companies, strengthening our Company and our portfolio companies.

(i) Has the board evaluated the pace of increase in the fair value of its investments? What were the main reasons for the relative underperformance in FY2019?

It should be noted that in FY2019, the non-Stimatix portion of the portfolio increased by 19.9%.

Given these two factors, the Board was satisfied, overall, with the pace of the valuation increase for the financial year.

(ii) Would the board disclose the “external independent valuator”?

Stimatix GI Ltd. is valued by Boston MedTech Advisors and other portfolio companies are valued by Variance Escola.

(iii) Can the company help shareholders understand the role played by management and the board in the valuation process?

Every portfolio company is valued at least annually after they have fully deployed our initial investment.

The valuation report is then sent to the Company’s external auditors, being Kost Forer Gabbay & Kasierer, a member of Ernst & Young Global, in FY2019, for audit and assurance. Valuation results are presented to the Company’s Audit Committee and Board as part of the approval process of the Company’s financial results.

We have 1944 guests and one member online