OSV stocks are heavily dependent on the fortunes of the crude market. They are widely viewed as one of the key beneficiaries of a rebound in oil prices. A robust demand for oil leads to an increase in planned E&P activities, resulting in higher demand for rigs, platforms and FPSOs, which in turn boosts the OSV market.

Crude, which has gained more than 20% since the start of the year, continues to hover near four-year highs, on fears of a supply crunch following a disruption in oil exports from Iran and declining production in Venezuela.

While Saudi Arabia and Russia have agreed to boost output, concerns linger over whether OPEC and its allied producers will be able to offset the supply losses.

Further boosting prices was Hurricane Michael, which shut some oil fields in the Gulf of Mexico. West Texas Intermediate (WTI) for November delivery traded above US$74 a barrel on the New York Mercantile Exchange yesterday.

The 10 largest OSV stocks on SGX have a combined market capitalisation of nearly S$2 billion.

In the July-September 2018 quarter, the five largest OSV stocks that posted the strongest rebound from their 52-week lows were: 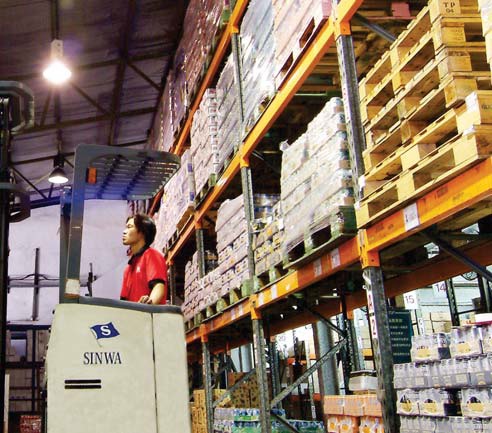 Sinwa warehouse: Delivering fresh produce and everything else needed by ships and offshore assets. NextInsight file photo
These five stocks have averaged a 21.3% price gain from their respective 12-month troughs.

The table below details the 10 largest OSV players in terms of market capitalisation, sorted by percentage price gain vs their respective 52-week lows. 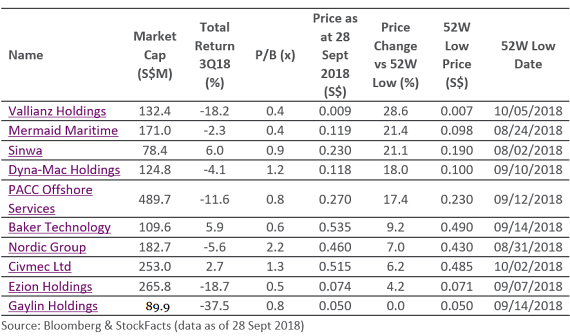