Details
Written by Kenny Chia (The Little Snowball)
Published: 01 May 2016

Question 2: Distribution & Selling (D&S) expense has increased significantly over the past 2 years compared to revenue growth, which has resulted in a flat to marginal decline in Sino Grandness’ bottomline. How does this benefit the shareholders?

Management shared that a main portion of the D&S expense is Advertising & Promotion (A&P). A&P is more of an investment than expense, it is not short term and results will not be seen immediately. The focus is on building brand value, which is intangible, by aggressively investing into A&P. Management also brought up that the recent independent valuation of Garden Fresh brand stood at RMB3.5bn (S$729m). Furthermore, Sino Grandness’ A&P (previously 4-5%, now 10%) has historically been lower compared to major F&B players (average 10-15%) as a percentage of sales.

Question 3: What is the management’s projected D&S expense for the current financial year?

CEO shared that one of the considerations he had is the response from customers/consumers. If the response is good, management will spend more. Mr Huang cited the recently launched coconut juice drink which was well received. His long term goal for Garden Fresh is for it to be on the scale of the major F&B companies (RMB 10-40bn in annual revenue), Garden Fresh is 10% of their size so there’s plenty of room to grow. Mr Huang expects A&P investments to intensify moving forward.

Question 4: How did the management derive the RMB0.018 per ordinary share dividend? Wasn’t there an agreement to pay out 10% of Sino Grandness’ net profits?

Mr. Parry Ng (investor relations representative of Sino Grandness) pointed out that in the agreement with the Thai strategic investor, the company would only pay out the dividends if feasible. The dividend was derived from the 10% net profit of the canned business, not of the group. Garden Fresh was excluded due to the Convertible Bond (CB) restrictions.

Question 5: Why is it on the company level, there is an increasing amount of accumulated losses?

CFO shared that as an investment holding company, it does not have any income but has expenses such as staff costs. He added that banks and fund managers usually look at the group level instead of the company level so there shouldn’t be much concern.

The shareholder said the accumulated losses would be a future concern since equity would turn negative, and that would look bad for the company. The auditor suggested the management to look into this area.

Question 6: Why are we borrowing money from the Thai Investors at 12-16.5 interest rate%? Why not borrow more from banks and other cheaper sources? 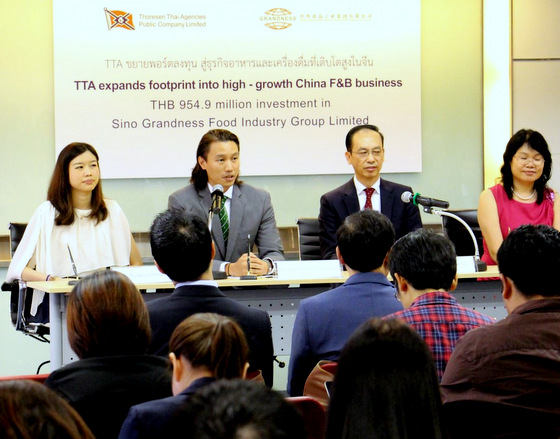 Flashback: Agreement signing ceremony. L-R: Ausana Mahagitsiri (MD of PM Group) | Chalermchai Mahagitsiri (CEO, Thoresen Thai Agencies) | Huang Yupeng (CEO, Sino Grandness) | Huang Yushan (Executive Director, Sino Grandness).
Photo: Sino Grandness.CEO shared that there were strategic reasons behind the move and things cannot be seen simply based on cost. He added that when Garden Fresh started, the CB @ 20% IRR seemed high but he felt that Goldman Sachs would help boost the corporate profile of Garden Fresh. So while the tangible costs were high, so were the intangible benefits.

On the TTA loan, Mr Huang said that it was rare to find a strategic partner committed to work together for the long term and even agreeing to lock up their Sino Grandness shares for 10 years. Mr. Huang also said that he could have gone to other funds but they may just sell the shares later, which would be detrimental to shareholders. A good relationship with TTA would also allow Sino Grandness to leverage on TTA’s business contacts and networks. For example, Nestle.

Question 7: How strategic is this partnership to the shareholders? The convertible option allowing TTA to buy shares at $0.55 per share would significantly dilute shareholdings.

CEO reiterated that since Sino Grandness’ IPO in 2009, he has never sold a single share and occasionally added to his position. As a majority shareholder (35.53%), he was in the same boat as the rest of the shareholders. In fact, any dilution would hit him the hardest.

However, Mr Huang said we shouldn’t be putting too much weight on a few cents of share price as it would be too myopic. Given his many years of experience doing business, he considered matters in the long run. For example, look at the Goldman deal. Back then the IRR was extremely high, people told him he was crazy but without the deal, Garden Fresh would not be as big as it is today.

Question 8: Is there room to negotiate on the option to convert the shares? The deal seems too good for TTA (thus unfair to Sino Grandness’ shareholders).

CEO said that inevitably, you’ll need strong strategic partners to further build the business. He doesn’t mind diluting the pie if the pie grows much bigger. During the short selling saga, he realised who his most valuable strategic partners are. For example. despite the short selling saga, the Thais still went ahead to buy placement shares at 40 cents (revised from 60 cents).

Question 9: What is the value of the Garden Fresh post-IPO?

CEO got very excited about this topic and started sharing about the progress of the IPO until the moderator, Mr. Parry Ng, reminded him not to comment further. Mr. Ng said they are forbidden by the HKSE to divulge any details. Failure to comply could result in further delay of the IPO. He added that management will keep shareholders updated on the progress of the IPO as and when possible.

[Though unfounded, Mr.Huang’s enthusiasm made me more confident in the probability of success for the Garden Fresh IPO]

Question 10: Timing of the TTA deal (US$20m loan) is a bit bad, isn’t it better to wait post-IPO? We shareholders have been around Sino Grandness for longer than TTA, this deal is fantastic to TTA.

CEO hinted that he had set his eyes on a partnership with Nestle. There has to be something for them (TTA). It is unlikely that TTA would be interested in the shares of Sino Grandness post-IPO when its shares are at higher prices.

Question 11: What are the long term growth plans for Sino Grandness?

CEO said that post-Garden Fresh IPO, the focus will shift to the snacks and canned food business. It is doing well and has huge potential. He drew a comparison with Want Want,a rice cake and flavored drinks maker, which delisted from SGX in 2007 and listed on the HKSE in 2008 at much better valuations.

[If it is true that the management intends to focus on grooming and spinning off its snack food business to HKSE or any other reputable stock exchange, then there’s definitely more upside to the growth story of Sino Grandness]

After much volatility and uncertainty over the past year, it does seem that the worst is behind us and that better days are right ahead. Now all eyes will be on the Garden Fresh IPO (expected to occur in July)!

This article was originally published on The Little Snowball, and is republished with permission.

We have 970 guests and no members online