DUKANG DISTILERS: 2Q a relief but turnaround not certain 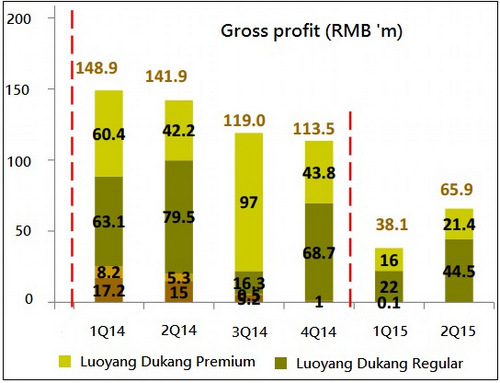 Sales of Dukang's baijiu, like those of other baijiu producers, have been hit by the government's austerity drive.
THIS CHART captures some of the essence of baijiu producer Dukang Distillers' recent business performance:

Somewhat similarly, revenue in 2QFY15 showed a positive improvement -- rising 11.6% quarter-on-quarter to RMB231.6 million. But it was 42.5% lower year-on-year.

2. Contribution from Dukang's Siwu series of baijiu (in brown, in the chart) virtually disappeared in the past two quarters as Dukang stopped production of this brand, diverting its grain alcohol and production capacity and advertising dollars to the Dukang series.

Bottomline: Dukang returned to profitability -- from a RMB29.5 million net loss for 1Q2015 to a RMB3.7 million profit attributable to shareholders in 2QFY15.

The A&P dollars were spent in its home market of Henan province while it reduced its television commercials on state broadcaster China Central Television.

Dukang generated positive cashflow, particularly in the 2QFY15, resulting in a RMB21.7 million increase in 1HFY15 in its cash balance to RMB412.9 million.

And this was after repaying RMB42.3 million in bank borrowings.

The management gave the following take on the state of the business as follows:

Chart compares the stock price performance of Dukang and its China-listed peers in the past 12 months. Chart: Bloomberg

The chart shows that Kweichow Moutai and Wuliangye Yibin have strongly recovered in their share price performance in the past 12 months. These are the leading baijiu brands in China and are multi-billion dollar companies.

A closer comparable to Dukang, in terms of product pricing, is Luzhou Laojiao, which has a market cap of about S$5 billion -- way above Dukang's S$106 million.

These three China-listed companies were buoyed by the surge in Chinese stock indexes in 4Q2014 with the launch of the Stock Connect scheme allowing foreigners anywhere in the world to buy Shanghai-listed shares for the first time.

The trio trade currently at a trailing PE of about 14X. Dukang, in comparison, has no PE as it was loss-making in the past year.

We have 1614 guests and no members online