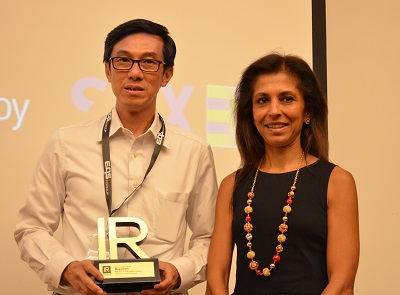 INVESTORS AND ANALYSTS have voted a relatively small cap stock as having the best investor relations practice among Catalist stocks.

MegaChem’s market cap is only about S$50 million, relatively small compared to Catalist stocks such as TalkMed (~S$650 million) and Astaka (~S$420 million). Yet, it garnered the most votes among about 170 Catalist stocks.

“Investor interest in Catalist companies dwindles down easily. The challenge for small cap companies is to ensure that investor interest can be sustained over the long term. Retaining shareholder loyalty is about building a sound and sustainable business, which can in turn enhance long term shareholder value,” said MegaChem’s CFO, Francis Yau, at the awards ceremony last Friday (4 December).

"We also need to keep communication channels open in good times and bad," he added. However, he qualified that while it is important to be consistent in its investor relations activities, it is even more important to deliver the results. MegaChem has won investor relations, corporate transparency and annual report awards almost every year in the past decade.

We have 1048 guests and one member online