Maybank Kim Eng: "Most negatives priced in" for Courts


Not pretty for core markets
Core markets are expected to remain weak due to poor consumer sentiment. 1HFY15 sales in Singapore plunged 15% YoY. Malaysia’s failed to pick up despite Hari Raya celebrations. In fact, revenue fell 10% YoY in 2Q, as the effects of its earlier credit campaign faded. With Malaysian GST introduction still ahead and Singapore property prices slipping further, demand in both markets is expected to remain lacklustre 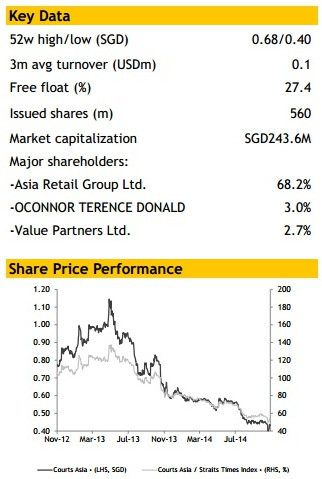 .
But Indonesia is new hope
Courts opened its first megastore in Bekasi, Indonesia in Oct 2014. It plans to open two more stores in Indonesia next year. We visited the store recently and left feeling more optimistic. Management shared that Indonesia’s revenue contributions have the potential to match 30% of Malaysia’s revenue by FY3/16 or ~8% of group revenue, based on expected PSF sales and further store expansion.
Cutting costs to prop up bottom line
Courts has taken extreme measures to prop up its bottom line. It has cut its workforce by 10%, closed loss-making branches, rationalised its tradeshow schedule and outsourced lower-value operations. Early results are encouraging. Gross margins rose from 29.5% in 1HFY14 to 32.7% in 1HFY15.
HOLD: Most negatives priced in
We cut FY15E/16E/17E EPS by 36%/28%/6% for lower sales. This lowers our TP to SGD0.40 from SGD0.52, based on 8x FY16E-17E EPS, on par with Malaysia-listed AEON Credit Services. Maintain HOLD as we believe most of the negatives are in its price.

We have 924 guests and no members online