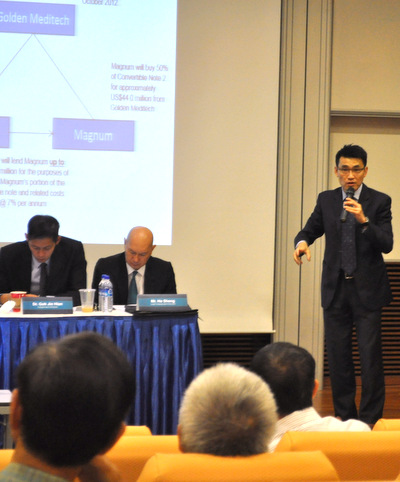 Cordlife CEO Jeremy Yee, in turn, gave a most interesting reply that you wouldn't know just from reading the EGM circular.

But some background first: The EGM was to seek shareholders' approval on two matters -- Cordlife's purchase of convertible notes of China Cord Blood Corporation (CCBC), and a proposed loan from Cordlife to Magnum Opus International for the latter to buy CCBC convertible notes.

Now, Magnum would have to pay Cordlife an annual interest rate of 7% (amounting to US$3.255 million) on the loan principal of US$46.5 million.

For that, Magnum can rely on a 7% coupon payment (amounting to US$1.75 million) on the convertible note to partially pay the interest.

There is still a mismatch between incoming and outgoing cashflows, so how will Magnum service the deficit? That was Mr Chandiramani's question. 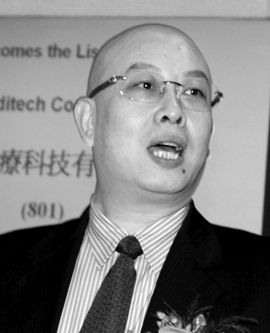 Kam Yuen, chairman and CEO of Golden Meditech. Photo: Company♦ Mr Kam Yuen, the sole shareholder of Magnum, could draw upon his personal savings and earnings. (He also owns stakes in HK listco Golden Meditech and other companies).
♦ He could use dividend payouts he is entitled to from CCBC to help pay for the loan interest.

But a check would reveal that CCBC, which is listed on the New York Stock Exchange, has not paid a dividend since its listing in Nov 2009.

Mr Yee revealed that CCBC is, however, now in a strong cash position because last year (2013) it introduced a scheme whereby its customers could pay upfront (instead of by yearly instalments) for CCBC's service of storing their children's cord blood for 21 years.

While a CCBC dividend payout would benefit its ordinary shareholders, would convertible bond holders benefit too?

Mr Yee highlighted another little-known fact: Convertible bond holders would be entitled to a CCBC dividend if the dividend for ordinary shareholders exceeded about 20 US cents a share. In that case, Mr Kam would be a beneficiary too. 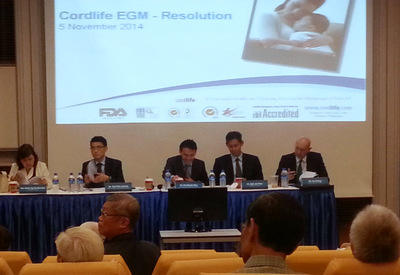 L-R: Eileen Tay (independent director), Jeremy Yee (CEO), Dr. Ho Choon Hou (chairman), Dr. Goh Jin Hian (independent director) & Ho Sheng (lead independent director).Mr Yee added that Mr Kam taking up the convertible notes should be viewed as a positive endorsement of the prospects of CCBC and its chances of being in the money (ie, the CCBC stock price would be above the strike price of US$5 when the notes mature in Oct 2017).

Cordlife is also acquiring the CCBC convertible notes -- if it didn't, Cordlife's stake in CCBC would be diluted from the current 10.02% to 6.44% when other note holders convert the notes to CCBC shares.

Seeking to explain that the acquisition of the notes was the most attractive route for Cordlife to ride on the Chinese market, Cordlife chairman Dr Ho Choon Hou said the company could boost its presence in China by a number of other ways but these were not as attractive or feasible.

For example, Cordlife could start its own cord blood bank business (but that's prohibited); buy a competitor (it would take time); or strengthen the relationship it has had with CCBC since 2008. Cordlife has helped CCBC achieve AABB accreditation and bring in new technologies.

Dr Ho Choon Hou, chairman of Cordlife. Photo: CompanyCordlife could also buy more CCBC shares from the open market but that would be relatively more expensive.

In the end, Cordlife decided to acquire the convertible notes as well as provide a financing facility to Mr Kam.

"Our directors had robust debates about the structure, why we are doing it and we collectively made a decision and we voted for the resolutions," said Dr Ho.

A shareholder, noting that the convertible notes and the financing facility amounted to a big commitment by Cordlife on the China market, linked this to the sharp fall in Cordlife's share price recently.

Responding, Dr Ho, referring to a recent analyst research report, said the analyst's view of the risks of CCBC was "unwarranted".

Dr Ho also questioned, among other things, if the analyst had done sufficient due diligence on various aspects, and whether the analyst knew Mr Kam as intimately as Cordlife's management does.

At the end of the EGM, 80.4% of the votes cast approved the transactions.

For more information on the convertible notes and the financing facility, check out Cordlife's Powerpoint materials on the SGX website.

We have 2074 guests and one member online