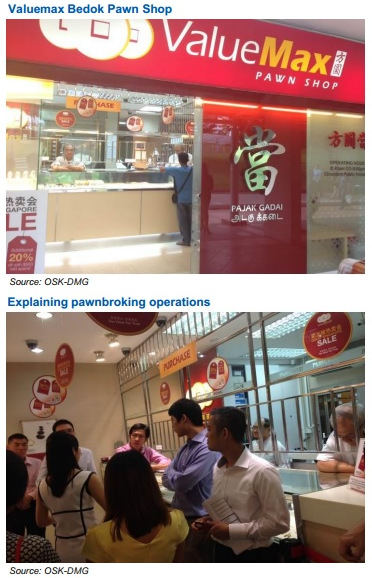 We invited more than 20 fund managers to a tour of Valuemax’s headquarters in Bedok, where it has a standalone second hand jewellery shop and a pawnshop. Executive director Yeah Lee Ching and CFO Carol Liew elaborated on the operations of the pawnbroking business.

The company is due to release its results next month. We believe a turnaround may be in store from 2H14. Maintain BUY, with a 1.9x FY14F P/BV TP of SGD0.56.
 A fruitful visit to the pawn outlet. We gathered positive feedback from the fund managers, who have gained a greater understanding of the pawnbroking operations and procedures. They were also impressed with the experience and skill set of the chief appraiser. Key concerns remain with the liquidity of the shares as well as its sensitivity to gold prices, which could impact its earnings.
 Private players losing market share. We maintain the view that the number of private standalone pawn shops will slowly decrease, and that they may lose market share to the listed peers. A majority of them do not have a successor to continue running the pawnshops. Listed players would then be able to expand through the acquisition of these private players at a discount, just like what Valuemax did last month.

The company bought over a pawnshop in Bedok Central, which is a prime location for pawnbroking, and a sizable pledge book at SGD2.95m (0.9x P/BV), which could immediately be earnings accretive.
 Gold price remains stable and strong, maintain BUY. Gold prices held steady near a four-month high at USD1,330+/oz, heading for the longest run of its weekly gains since March. Concerns about the vulnerability of Europe’s economy and rising tension in the Middle East boosted the demand for safe-haven investments.

As gold prices have remained strong since the start of this year and considering the relationship between gold prices and earnings, these factors further reinforce our view that there will be a turnaround this year.

We estimate its net profit after tax (NPAT) to grow by 45.4% y-o-y in FY14. Going forward, we also expect the consolidation of the pawnbroking business, which is favorable to listed peers. Maintain BUY with a 1.9x FY14F P/BV TP of SGD0.56. 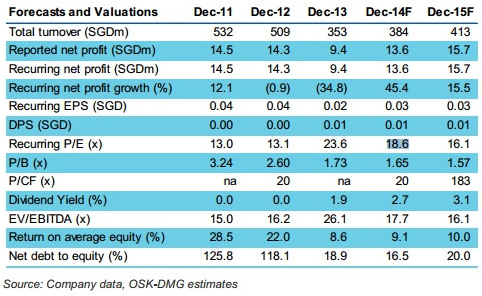 We have 541 guests and no members online