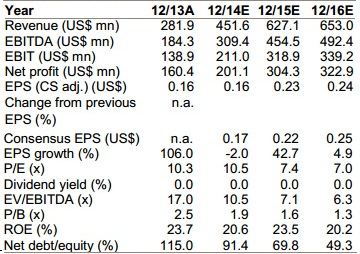 Source: Company data, Thomson Reuters, Credit Suisse estimates■ We initiate coverage of Ezion with an UNDERPERFORM rating and a target price of S$1.80.

While Ezion has typically been seen as a play on the underpenetrated liftboat market, we believe the market is under-estimating the risks of a shift in its portfolio towards service rigs.
■ A service rig is not a liftboat. Service rigs are old jackups converted into other uses including accommodation, or that continue to be used as drilling rigs.

With an acceleration in contract awards since 2012, Ezion's fleet of 12 service rigs in operation exceeded its fleet of five liftboats in January 2014. Based on our estimates, the average age of Ezion's service rigs is 33 years, the second oldest globally. As the global jackup fleet is expected to grow by 30% with a surge in newbuild deliveries, we expect the rig replacement cycle to drive downside pressure on dayrates and utilisation rates of older assets.
■ Greater competition expected in liftboat market. We believe Ezion's strength lies in the liftboat market, where our proprietary liftboat model indicates a potential for the fleet in Asia Pacific to grow by close to 80 units.
However, we expect significant new competition to emerge due to the low barriers to entry, and our channel checks indicate that both global liftboat operators and local players are expanding their fleet in the region.
■ Valuation at premium to peers. Our target price of S$1.80 is derived from a SOTP valuing Ezion's service rigs using a DCF with a useful life of five years.

While Ezion's P/E is at a discount to peers, we believe this is justified as close to 40% of its 2015 earnings are from service rigs that will not be recurring beyond 2018.

On 2015 EV/EBITDA of 7.1x, Ezion is trading at a premium to the sector average of 6.5x despite its fleet of older assets.

We have 964 guests and one member online