"EZION is a positive play on strengthening USD," says Nomura


Misplaced concerns on the recent USD strength and Ezion’s debt
In our view, the market’s concerns on the threat of a strengthening USD against Ezion’s debts are misplaced as: 1) There is a natural hedge, as Ezion’s assets are USD-denominated, while its debts are largely denominated in USD, and some in SGD; and 2) we expect Ezion’s net gearing to have peaked at 1.2x in FY13, and to decline towards 0.6x by end-FY16F. This is due to our expectation of improving FCF and retained profits, as we believe that Ezion is on track to reach its tipping point of self-funding fleet expansion. 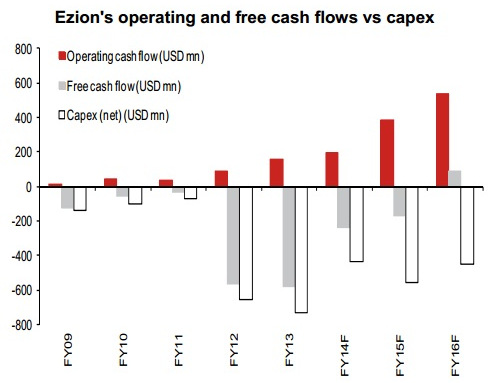 New contracts to be lucrative, even as USD and interest rates rise
In our view, the market’s revived concerns on the threat of rising USD and interest rates to Ezion’s profits are again overplayed as: 1) Ezion’s profits are mostly denominated in USD, and this matches well with the USD-denominated interest repayments; 2) Ezion services the production phase in shallow water oil fields, and we expect it to add on to the eight charter-out contract wins YTD, and grow its revenue; 3) the impact of a sharp interest rate increase is manageable for Ezion given 70% of its floating rate exposure is hedged. Assuming no hedging, we estimate a 100bp jump in interest rate to reduce a liftboat’s profitability by 4%, and the group net profit by 3-4% in FY15-16F.

We have 1013 guests and one member online