SIGNS OF LIFE: Why A-shares Are Headed Higher

And there’s likely more gas left in the tank for the recent run.

The Shanghai Composite Index, the benchmark tracker of both A- and B-shares traded in Shanghai and Shenzhen, is currently trading at around 2,237.

China's Shanghai Composite Index has had a stellar summer and there may be more upside on the way.     Source: Yahoo Finance

In the month of September alone, which is only at the halfway point of completion, the benchmark index has jumped a healthy 6.5%.

The fact that listed securities houses, banks and other financial institutions are doing much of the heavy lifting these days is the result of larger inflows of investment capital circulating through the equity markets.

During the recent run, listed lenders, brokerages and other commercial enterprises have seen capital inflows of 975 million yuan, 498 million and 661 million.

Not only is this good news for brokerage share levels and daily trading turnover activity but the sudden surge in funds flowing into and out of various favored counters translates into higher commissions for brokerages, thus serving as a double bonus of sorts.

On the other end of the spectrum, net fund outflows of late from machinery, electronic components and non-ferrous metals stands at 1.13 billion yuan, 783 million and 706 million, respectively. 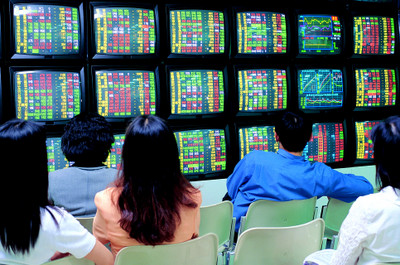 Better than expected export performance is lifting Chinese shares. Photo: nipicMuch of the recent rise in investor optimism, however modest, is more psychological than fundamental.

The oft-repeated signals from the US Federal Reserve that the days of easy credit and low interest rates are soon to become a thing of the past would normally be a drag on sentiment.

Specifically, Washington is increasingly direct in its intentions to either substantially scale back or do away with Quantitative Easing (QEs) altogether – or at least for the meantime -- perhaps to be reviewed based on the results of the major mid-term congressional elections for dozens of House and Senate seats in November of next year.

Despite the likelihood of an end to the QE era and the spendthrift behavior it encourages among US consumers for Chinese exports in particular, many are still predicting a solid calendar year of GDP expansion in the world’s second biggest economy.

World Bank President Jim Yong Kim said over the weekend that the PRC is likely to achieve its GDP growth target of 7.5% for 2013.

However, he cautioned that higher CPIs in emerging markets as a result of the likelihood of a scaling back in the QE campaign in the US does present a downside risk to the PRC’s GDP objective for this year.

China’s ongoing campaign to keep its exports competitive while also working to pry open its own domestic market is not being lost on major investment banks like Nomura, UBS and Deutsche.

All three recently upgraded their 2013 GDP forecasts for Mainland China, putting them all above the World Bank’s and Beijing’s 7.5% expectation for the current year.

The PRC’s better-than-expected export performance in August has much to do with their rising optimism.

Should things continue along this trajectory, look for recent laggards like machinery, electronics and non-ferrous to quickly get back into the fund inflow category.

Who Is China's King, Or Queen, Of The Housing Hill

We have 544 guests and no members online