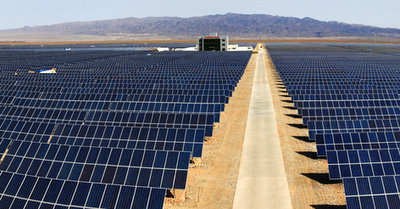 On June 10, 2013, Goldpoly completed the acquisition of a 92.17% equity interest in CSPG, via the issuance of 959.5 million Goldpoly consideration shares and convertible notes worth 1.16 billion hkd.

“Since the fair value of the total consideration transferred at the completion date of approximately 3.56 billion hkd was significantly higher than recoverable amount of the underlying business, goodwill recognized of approximately 1.37 billion was considered to be immediately impaired by the management,” said Goldpoly Executive Director Mr. Lam Ho Fai.

Net loss for the solar energy business for the January-June period shrunk to 49.3 million hkd versus a net loss of 64.5 million in the year-earlier period.

“The solar cell market continued to be weak and the group has continued to work vigorously to improve efficiency of solar cells and keep up with customer needs.

“During the period, we completed construction of an on-grid photovoltaic project in Quanzhou, Fujian Province, and the electricity generated has been used for our manufacturing business and offices, with the surplus sold to the State Grid,” Mr. Lam said.

He added that Goldpoly is looking for opportunities to expand its business downstream, which is growing and capable of providing a stable source of income.

“In the first half we achieved important strides in our solar power plant business.”

Examples include Goldpoly’s Gansu Jiayuguan 100 MW solar power plant receiving confirmation that it has achieved on-grid status in June 2013 with revenue on sale of electricity expected in the second half of 2013.

“Currently, Goldpoly has two business units: the manufacturing and sale of the solar silicon cells and solar modules as well as a focus on the development, investment, operation and management of solar power plants.

“Since the solar cell is an important component for the solar power plants, Goldpoly anticipates a synergy effect of these two business units will be achieved by the vertical integration of our solar energy business,” Mr. Lam added.

With continuous support from Beijing for the solar energy industry, the expected installed capacity of solar power in China was recently revised upward to 35GW in China by 2015, compared with the previous estimate of 21GW.

Goldpoly recently 1.51 hkdA more recent acquisition by Goldpoly came just last week when the firm announced it had signed a conditional deal with Singyes Solar (HK: 750) for the purchase of 100MW of roof-top solar power plants.

At the time of the signing, Goldpoly Executive Director and CEO Mr. Alan Li said: “Both parties will strategically cooperate on roof-top and ground-based solar power plants, micro-grid projects, green energy-saving buildings, application of low-carbon new energy in the PRC as well as the development of green, intelligent low-carbon, satellite cities in China.” 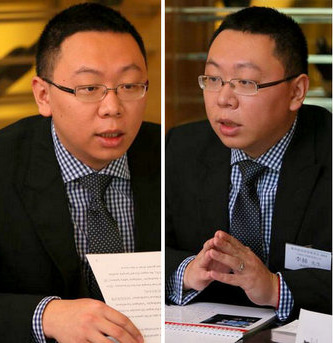 First half net cash inflow generated from operations surged to 342 million hkd versus 212 million in the year-earlier period.

The Board declared an interim dividend of 1.4 HK cents per share for the six months ended 30 June 2013.

Anxin-China has two reportable segments and is managed separately as each business requires different business strategies.

ISD (Intelligent Surveillance, Disaster Alert and Rescue Coordination) involves the setting up of a dedicated communications platform using Internet-of-things technologies, through which industrial safety parameters, such as gas levels in a coal mine, oil pressure in an oil depot, etc, are transmitted from industrial enterprises to local government monitoring centers.

First half revenue contribution from the ISD system business segment was primarily derived from one-off installation fees from sales of surveillance points and continuing management fee for ongoing system management and maintenance. 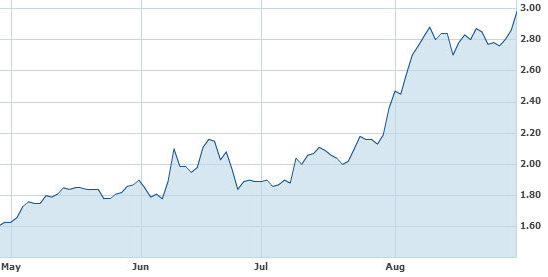 Anxin recently 2.98 hkdAnxin-China has now expanded its geographical reach to 11 provinces and 39 cities/counties across China.

The firm has shifted its focus to tap into new provinces/cities in an effort to maximize its presence in local markets.

“Backed by its mature business model as well as innovative product offerings, Anxin-China is well-positioned to outperform its peers and ride the wave of ‘Smart Cities’ construction to realize the corporate vision of ‘Anxin-China, Your Safety is Our Business’,” Mr. Liu said.

He added that Anxin-China will continue to put more emphasis on R&D for upgrading systematic structures, improving operational efficiency and diversifying features.

“In the meantime, we will devote more effort to designing the next-generation of ISD system/ISS and further penetrate the market with an integrated system that couples a unique touch interface with the capabilities of processing ultra-large-scale data.”

We have 313 guests and no members online