This makes Mr. Liu a “substantial shareholder” in Kingwell.

Kingwell recently 0.73 hkdKingwell Group has transformed itself into a gold mining company last year, from an original focus on printed circuit boards, and is now mainly engaged in gold resources project investments and gold supply chain development. Kingwell recently bought a 51% stake in Commerce Prosper, which owns a gold mine in the Russian Amur area, with expected gold reserves of 35 tons. Total consideration amounted to 13 million usd and Kingwell can increase the holding to 65%. Kingwell has also acquired 70% equity interests in two PRC firms -- Jinxin Co and Jinhui Co -- for a consideration of 370 million yuan.

JP Morgan said it is raising its target price on Ju Teng International (HK: 3336) to 6.3 hkd from 6.0, while reiterating its “Overweight” recommendation on the world’s top computer casings play.

“We think Ju Teng’s migration into the handset space is a very good move. Now we will focus on the feedback on this new composite casing as it could determine the addressable market scale for Ju Teng in the next two to three years,” JP Morgan said.

Ju Teng will begin to supply black/white casings for a US smartphone vendor this quarter.

The casing is a new composite material made by mixing PET and PVC. 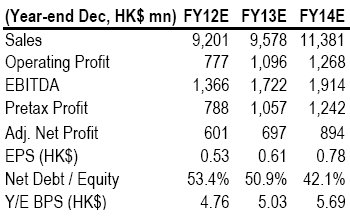 Source: JP Morgan “With better hardness than traditional plastic, it does not need other metal parts and thus could reduce weight. In addition, it is also cheaper and more flexible than metal for industrial design (e.g., curved back plate),” JP Morgan said.

The research house said it views this as a very good move as it implies a new growth area when notebook computers slow down. 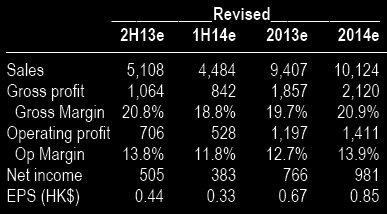 HSBC Global Research said it is maintaining its “Overweight” call on Ju Teng International (HK: 3336) and hiking the target on the computer casings giant to 7.0 hkd from 6.5 (recent share price 4.73).

We have 1053 guests and no members online