AT ONE TIME, I was making good money buying and selling A-shares.

Now I've lost everything and my wife, daughter and I pay our bills mainly by collecting scrap cardboard and paper.

So what went wrong, you ask?

My wife and I lived a white collar life, and I provided for all of my wife’s and daughter’s needs and then some, buying them whatever their hearts desired.

That was then, and this is now. 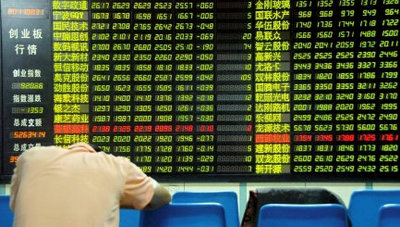 The stock market can be a real drag for unlucky investors.
Photo: huaxiNowadays, we are lucky to have a clean shirt to wear, let alone a bright white collar to go with it.

It all started around a decade ago, when our daughter was still playing with dolls and had a head full of dreams about a bright and boundless future.

I remember coming home one night after a busy day at the office, and being greeted at my door by my smiling wife with a warm hug and a “Happy Birthday!”

I had completely forgotten that I had aged another year, so engrossed was I at the time with playing the stock market and making good money all the while.

But more telling was my wife’s question at the time: “Where are we going to celebrate?”

In our current state, the idea of paying for a meal at a restaurant is so foreign, remote and far-removed from the state into which we’ve now fallen that the memory seems as if stolen from a total stranger.

At the time, I had one philosophy in mind that dictated everything I did: “Hard work will bring a better life.”

Little did I realize that incessant wheeling and dealing in equities, although hard enough work on its own, was hardly a guarantor of an easy life down the road.

I think the beginning of the end came when I clearly began putting my investments ahead of my family.

My daughter loved to hear a good story, and early on I would often lull her to sleep with a good fable or two from her collection of children’s books.

But for several months on end, I was either too busy or too exhausted to keep this bedtime story tradition alive, and she didn’t take kindly to it.

One night, I was sitting in the living room with some fellow investor-friends discussing the economy, the leadership, but most importantly – our stock picks.

In comes my daughter, holding her favorite dog-eared storybook, repeatedly interrupting my “important” investment discussions with a request to hear a tale before bed.

In my annoyance, and much to my shame, I reached out and angrily slapped her hand away, sending her running into my wife’s arms in tears.

But what really revealed to me how far I had fallen was my wife’s reaction.

In fact, I was doing nothing of the sort, and hadn’t for several months already, and was on a downward spiral to penury and eventual bankruptcy.

The undulations of the market became the only thing of importance to me.

Before I became addicted to stock trading, I would keep healthy hours, getting up early to work out and have breakfast, and get to bed at a reasonable hour after a full day’s honest work.

However, I gradually began an obsession with chatting online with fellow traders long after the local bourses had rung their bells, desperately seeking out a nugget or two of wisdom on what I should do with my portfolio when the sun came up.

At first I justified this reckless behavior by claiming a need to follow markets in the US and Europe as they often gave hints on where A-shares were headed the following day, which of course meant that I always felt guilty and lazy going to sleep – thinking I surely must be missing or forgetting something.

My wife protested at first, urging me to try and get some sleep, but after a while she resigned herself to my incurable addiction, and my daughter had long since stopped asking me to read her stories.

I was completely possessed by trading and was basically dead to my family.

I remember the day well, in late May of 2007, when my own father reluctantly handed over 60,000 yuan from his retirement account after repeated guarantees from me that I knew what I was doing and could multiply the capital quickly.

Things haven't been much better for Hong Kong shares this year either.  Source: Yahoo Finance

After all, I had done very well up to that point, and had a cushy lifestyle to show for it.

So my father’s nest egg, along with my own life’s savings which was several times larger, all went into the stock pot.

That same day, my addiction began in earnest, and was further fueled the next day after I realized a small profit.

“Good news! Our investment has already earned us enough money to buy two bottles of Maotai baijiu!” I excitedly told my father.

We both had trouble sleeping that night, so elevated were our spirits – in more ways than one, and I was so happy to finally be sharing the fruits of my “market brilliance” with my father.

But like the hangover that greeted us the next morning, so did the specter of loss and failure begin creeping into my life.

On May 30, the bourse regulator suddenly and without warning raised stamp taxes, thus sending the Shanghai Composite Index plummeting.

But I stood my ground, perhaps still a bit tipsy on baijiu and drunk with my recent success.

For the next several days, my portfolio shrank down to a mere shadow of its original size, but I stubbornly stayed put.

In less than a week, the “God of Wealth” had swallowed up over half of my investment’s value, and I abandoned ship in a wave of panic, with just a fraction of my entire net worth still available.

Lo and behold, the next day the market surged and I kicked myself for my rashness.

I quickly found a “friend” who owed me a favor or two, and with his help was able to secure a loan of 100,000 yuan which of course was immediately thrown back into A-shares.

We all know what began taking place in Shanghai and Shenzhen in late 2007 and 2008.

But this time, I would not be played the fool again and despite a sustained decline in the benchmark Index, I held firm, not wanting to regret bailing out too early once again.

Around came 2008 and the global financial meltdown, and my entire investment was soon worth just pennies on the dollar.

But now, in addition to a disappointed father, and a heartbroken wife and daughter, I had an irate creditor to deal with.

And my day job was suffering tremendously due to my incessantly checking the status of my moribund shares, and arriving on the job with just a few hours sleep.

My 300,000 yuan original investment had frittered down to just a few thousand renminbi.

I am ashamed to admit that suicidal thoughts haunted me daily, and it was only out of love for my long-neglected family that I kept myself from jumping off a tall building.

Obviously, I am still alive today, if you can call it living.

As I write this, my wife is in our tiny living room bundling together crushed cardboard boxes we’ve just collected before handing them to our daughter to exchange for cash at the local recycling center.

We usually send her because she ends up coming back with a bit more money than we get ourselves.

“This should be enough to buy you a few homework booklets for school,” my wife quietly says to her.

That sends the tears suddenly streaming down my face.

This is all my fault and my fault alone, I think to myself.

So why is my entire family being tormented as well?

0 #1 greenrookie 2013-06-19 07:28
such a sad story, at least he still has his wife and daughter... guess many in laws would have brought them back and have a clean cut with the family. Pity the father who lost his retirement egg.

But the story seem fake, (though it is a good reminder to not treat the stock market as a casino)
1) Why can't he get another job? Yes, the loan sharks are hounding him, but disturbing him at his work will make his ability to repay even lower.
2) Why didn't he find another job, since he is a white collar worker?
3) Why didn't the wife and daughter leave him?
4) How did he manage to get online to tell his story if he is indeed so poor? It should be related by another?
5) Why couldn't his family or his in laws at least take in their daughter?/ daughter and wife?
Quote
Refresh comments list
NextInsight.net

We have 878 guests and 8 members online