Macquarie Equities Research said it is upgrading its call on Comtec Solar Systems (HK: 712) to “Outperform” from “Neutral,” while hiking its target price to 2.4 hkd from 1.0 (recent share price 1.98 hkd).

“Warren Buffett bought two solar farm projects in the US from Sunpower, the largest customer of Comtec. There is strong long-term demand support for Comtec’s N-type wafer,” Macquarie said.

The Antelope Valley projects (1.83GW) Buffett bought use high-efficiency modules to minimize land use. Macquarie said it had confidence that Buffett will continue purchasing high-return projects from Sunpower with N-type wafers supplied by Comtec.

“China rooftops will see a boom in demand for more mono wafers. Management has indicated that besides Sunpower and Panasonic, Comtec is optimistic it will enlarge the customer base from China as mono products suit rooftop projects with limited space, which could grow at 100% p.a. in China in 2013/14,” the research house said.

“We infer that Comtec potentially establishing 2GW capacity in Malaysia is not only a contingency plan in case the EU imposes a tariff on Chinese solar products, but preparation for Sunpower’s production growth,” the research note added. 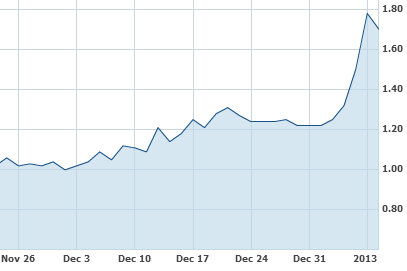 Management anticipates >90% utilization rate in 2013/14 given the strong order flows.

Assuming the capacity expansion goes smoothly in Malaysia, Macquarie said it expects Comtec’s gross margin to improve to 18.0/19.2% from 16.6/16.3% in 2013/14 because of the 0-5% wafer processing cost reduction, which is driven by lower electricity and staff costs in Malaysia, and the procurement of liquidated equipment at very low prices.

Macquarie said it is raising its 2013/14E EPS for Comtec by 25%/85% after incorporating higher shipments and higher margins, estimates which are 38% and 76% higher than consensus.

“Although we have not seen clear signs of inflection of solar sector, we prefer Comtec due to strong order visibility and profitability. We use a target P/B multiple of 1.4x FY13E with 5-year (13-17E) average ROE of 18.1% to derive our TP of 2.40 hkd, roughly in line with its DCF fair value.” 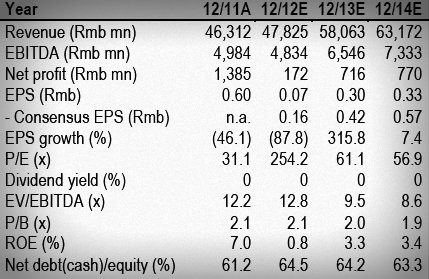 “BYD primarily focuses on the low-end segment, where demand is slowing and competition is intensifying.

“We expect its sedan sales to remain weak in 2013 mainly due to lack of attractive models. BYD is selling EVs mainly to governments and fleet operators. However, we believe EV is still far from full commercialization in China mainly due to infrastructure constraints,” Credit Suisse said.

BYD’s profit from handset components and assembly services could fall more than 90% YoY in 2012.

Its major customers Nokia and HTC continued to suffer declines in market share, and this is likely to impact BYD’s 2013 orders.

Warren Buffett has a 10% stake in BYD.
Photo: Company

“We expect BYD’s sedan sales to remain weak in 2013 due to intensifying competition in the low-end segment.

“BYD is recalibrating its product strategy and introducing more upscale models, such as the SUV S6,” the research house said.

However, Credit Suisse said it believes BYD will miss its S6 sales target in 2012 mainly due to strong competition from Great Wall’s H6 and Geely’s GX7.

Its electric MPV E6 has been under trial running in Shenzhen for two years as an electric taxi and its E-Bus K9 has also received thousands of orders from both domestic and overseas markets.

“However, major technical efforts in the auto industry are still concentrating on improving the current combustion engine technology.

"Expansion of charging infrastructures are built by state-owned enterprise (SOE) grid companies and lag behind schedule. We expect BYD’s EV business to be constrained by the infrastructure issue and is unlikely to spread over to the national market shortly,” the research note added. 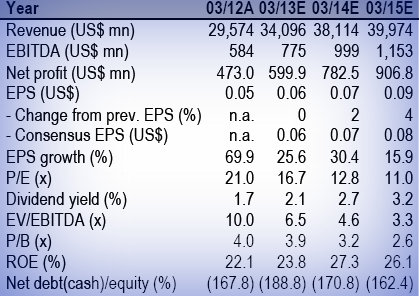 Credit Suisse said it is maintaining its “Outperform” recommendation on Lenovo Group (HK: 992), the world’s No.1 PC play by shipments.

“Lenovo has a solid position in a bigger China handset market.

"We believe Lenovo has the tools to build a profitable smartphone business long-term in China/Asia-Pac and has a sound strategy to do so,” Credit Suisse said.

Lenovo announced at the recent tech show in Las Vegas a full array of new smartphones for a wide range of customers -- from first-time consumers and young professionals to advanced users.

The five-model strong portfolio will be available in the PRC and various global markets beginning this month.

We have 561 guests and no members online