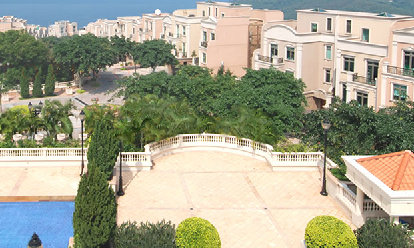 Cheung Kong Holdings, sporting the confident exchange ticker HK:1, is the brainchild of legendary founder and tycoon Li Ka-shing, the richest Asian in the world. His property development firm has extensive holdings in the PRC. Barclays is 'Overweight' on Cheung Kong.
Photo: CK Hldgs

“Liquidity continues to expand the Hong Kong property price bubble, but the cycle is becoming increasingly unstable, in our view.

In addition, the consensus nature of investor positioning within the sector concerns Barclays – every investor expects to get out before the bubble bursts.

The road to revulsion

The property cycle appears to have reached the euphoria stage, driven by momentum trading and an over-estimation of future returns. 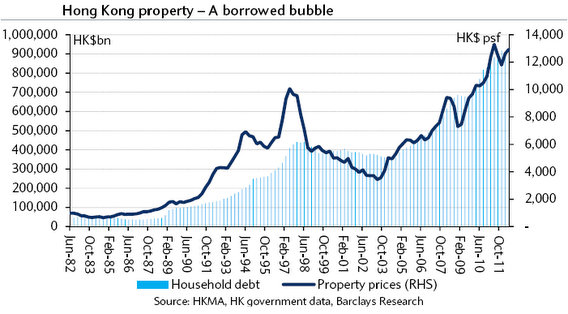 “Yet further property price rises are likely to induce additional government measures to choke off liquidity and force supply on first-time buyers, who can ill-afford current prices,” Barclays said.

A first half rally in property prices followed by a pull-back is the most likely scenario for 2013, in the research house’s view.

“Most investors see the property bubble – but at the same time have been compelled to invest in it, we believe, confident they can get out before it bursts.

Yet an almost universal reliance on the same information – US interest rates – suggests all will head for the exit at the same time, or ignore the alternative risks to a price correction,” Barclays said. 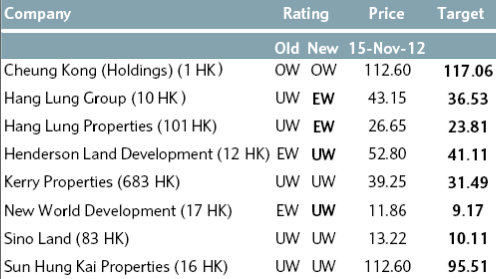 Although stocks are trading on wider-than-average NAV discounts, their premiums to pre-bubble book values suggest they are far from cheap.

“Greater downside potential in values and the increasing probability of a material price correction over time warrants wider NAV discounts and lower share prices, in our view.”

Given the “strong” liquidity inflows the research house is raising its 12-month price targets, yet continues to remain firmly negative on the sector.

We recommend derisking portfolios by switching to property investors and lowering beta exposure, and through portfolio hedging.”

Separately, the US-based research house visited key developers’ projects in the Chinese cities of Chongqing and Chengdu, both in the country's southwest.

The rise in the completion of non-Tier 1 cities (e.g., CQ, Chengdu, Wuxi) mixed-use projects will lead to a jump in retail and office supply in these cities, the research house said.

“The situation is worse for the office segment, with an average vacancy rate of 32% in Chengdu.”

“Most of the people we met commented that Longfor's North Paradise Walk is still the best retail space in Chongqing. CR Land’s new Chengdu MixC has been successful, but the new landlords have started to feel stronger pressure,” Morgan Stanley said. 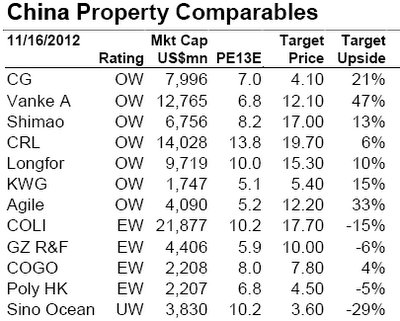 The occupancy cost of the key brands has tightened, e.g., that of LV's Wuxi store is as low as 2.4% of sales.

“Commercial properties, including retail, office and serviced apartments, are not covered by the home purchase restrictions and have helped underpin developers’ sales in the last two years.

“But the surge in supply may alter the strata-title commercial property market,” the research house added.

“The possible downward pressure on rent may drive ASP lower.”

Daiwa is also reaffirming its “Buy” recommendation on the Hong Kong-listed firm.

Sunlight REIT’s Queen’s Road East 248 property is still riding on the trend of decentralization for grade A offices. 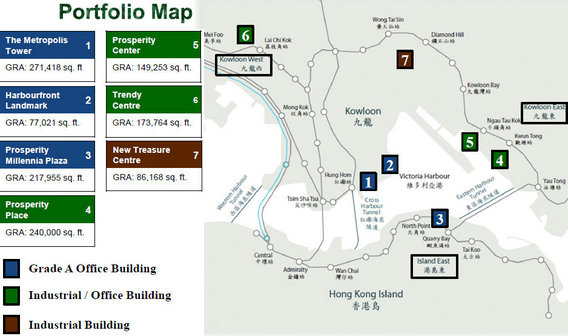 “We think there is still room for the rental gap between this building and that of Central-Admiralty to narrow further,” Daiwa said.

The research house added that Sunlight REIT is also riding on the growing popularity of suburban malls. 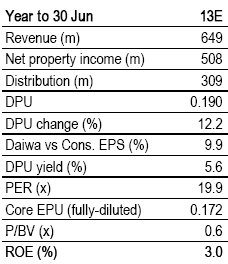 “After transforming the Sheung Shui Shopping Arcade into a niche mall benefiting from cross-border spending, Sunlight is now moving forward to start the asset enhancement initiative for Metro City Phase 1, the third-largest property in its portfolio.”

“Sunlight is so far the only H-REIT that has worked on selling non-core assets and using the proceeds to buy back units, which resembles ‘arbitraging between the physical market and stock prices’.

While Sunlight’s unit price has rallied in recent months, Daiwa said it continues to believe Sunlight is moving along “a promising path,” and to reflect what the research house considers as its stronger DPU growth prospects, it has hiked the target price.

“We believe Sunlight REIT’s assets are well-placed to benefit from various structural trends in the Hong Kong office and retail property market but that this may not yet be fully recognized by the market.”

We have 822 guests and no members online